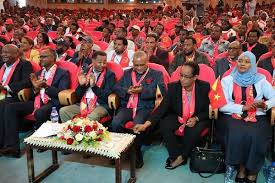 The Tigray People’s Liberation Front, TPLF, said the Prosperity Party, which set out to merge members of the now defunct Ethiopian People’s Revolutionary Democratic Front, poses a “clear difference of purpose.” The new formation has eight parties including three members of the EPRDF, formerly a TPLF-controlled rebel group that governed Ethiopia since Mengistu Haile Mariam’s Marxist regime was overthrown in 1991.

The unity party as part of Abiy-led reforms in Ethiopia envisions fair representation of the Horn of Africa country’s ethnic groups.

The TPLF leadership is considering strategic relationships with other “federalist forces as a forum, coalition or a front,” it said in a statement on its Facebook page after a meeting on Sunday.