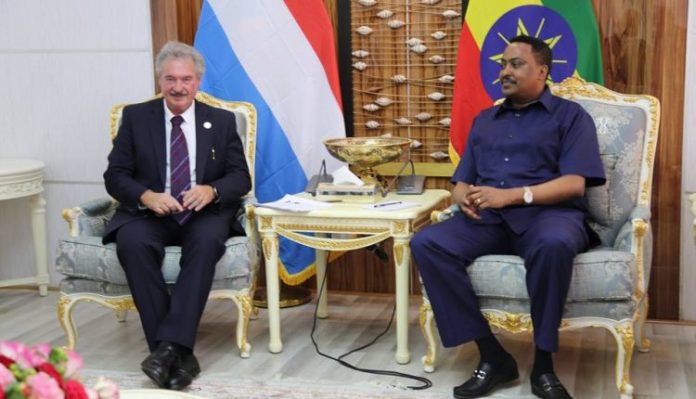 Addis Ababa, February 13, 2019 (FBC) – Ethiopia and Luxembourg have agreed to further strengthen cooperation on both bilateral and multilateral venues.

This has been emphasized during a meeting between Ethiopia’s Minister of Foreign Affairs, Dr. Workneh Gebeyehu and the Foreign Minister of Luxembourg, Jean Assselborn today.

Both parties underscored the importance of enhancing bilateral relations and other multilateral issues including migration and refugee management.

In such score, Dr Workneh took note of Ethiopia’s refugee law, which he described as one of the most progressive refugee policies in Africa and beyond.

He also acknowledged Luxemburg’s support for the EU-Africa Strategic Partnership.

The Dr Workneh further briefed his Luxembourger counterpart on the positive socio-economic and political developments in Ethiopia and the current winds of hope in the Horn of Africa.

The Foreign Minister of Luxembourg, Jean Assselborn, on his part, expressed his country’s keenness to further boost relations with Ethiopia.