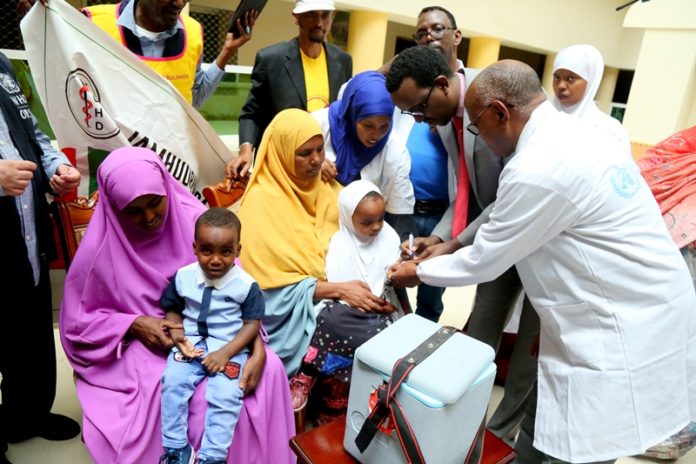 The overall objectives of this meeting were to review the 1st round implementation of synchronized cross-border activities between Somaliland, Puntland and Ethiopia

GENEVA, Switzerland, July 26–The second synchronized Horn of Africa cross-border polio coordination and micro planning meeting which was organized for district level health officials of Ethiopia and Somaliland and Puntland held from 16-18, July 2019 in Jigjiga city of Somali region in Ethiopia. The first synchronized cross border micro planning meeting was held in Hargeisa Somaliland from 12 to 13 June 2019 with great success where the lower level staffs were fully involved and engaged in the process of cross-border micro plan.

This second synchronized cross-border meeting was attended by Ministry of Health National, Regional, zonal and woreda level officers, CORE Group, CDC, Rotary, WHO and UNICEF. The overall objectives of this meeting were to review the 1st round implementation of synchronized cross-border activities between Somaliland, Puntland and Ethiopia; to identify the gaps and challenges and discuss and develop the way forward to address the challenges; to review the preparedness activities of the cross border for the upcoming extended campaign of monovalent oral polio vaccine type2 (mOPV2) and to further update the cross border micro plans for both side of the borders to ensure all children would be reached.

The Somali Regional Health Bureau (RHB) Head, Dr. Yusuf Mohammed Ali in his welcoming remark said that “The RHB looks forward to continue working closely with the multitude of partners in Ethiopia and abroad, to make sure that every child is vaccinated to protect our children from Polio and other Vaccine Preventable Diseases (VPD).”

Dr Anand Saumya from UNICEF Eastern and Southern Africa Regional Office (ESARO) in his remark also underlined the importance of this joint planning meeting and the synchronized campaign for a better outcome.

Mr. Christopher Alexander Kamugisha, the Coordinator for the global polio eradication initiative (GPEI) Horn of Africa Office on his behalf congratulated the Ethiopia and Somali Region teams for the successful completion of the first round mOPV2 vaccination and urged to use this planning meeting as an opportunity to share lessons learned and discuss how best to get prepared for the upcoming next rounds.

The next two days will focus on reviewing and updating the synchronized micro plans for the cross border areas for the next campaign. Some of the outcomes expected from this meeting includes updating synchronized micro plan at border crossing points, to reach common understanding and agreement on the dates for the cross-border polio outbreak response, strengthening the cross border community based surveillance for AFP and other diseases surveillance and strengthen the mechanism for timely sharing of AFP surveillance data and other disease events.