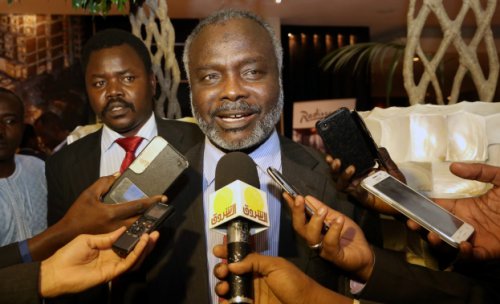 July 21, 2019 (KHARTOUM) – Ethiopian authorities Sunday reconsidered the deportation of Gibril Ibrahim, the leader of Justice and Equality Movement (JEM) from Addis Ababa after forcing him out of the hotel where he participates in Sudanese opposition meetings and conducted him to the airport.

Sudanese political and armed opposition groups are holding consultation meetings in Addis Ababa where they discuss a number of issues related to the transition in Sudan, with the participation of African Union and Ethiopian mediators who joined them recently.

However, on Sunday morning Ethiopian security agents informed Ibrahim that he and his delegation are persona non grata and should leave the country immediately.

Infuriated by the decision, the opposition groups stopped their meetings and protested the move to the African Union and the Ethiopian government, as many said they should go elsewhere to pursue their meetings and others went to the airport to show their solidarity with the deportees.

Several opposition sources told Sudan Tribune that the Chairperson of the African Union Commission, Moussa Faki, intervened and asked the Ethiopian authorities to stop the deportation.

A spokesman for the Sudanese Revolutionary Front (SRF), Mohamed Zakaria Farajulla, who is also a JEM member told Sudan Tribune that Ethiopian security agents arrived Sunday morning to the hotel where the Sudanese delegations are hosted and meeting and asked the JEM delegation to leave the hotel after being notified that they are unwelcomed persons in Ethiopia.

He explained that the Ethiopian authorities had asked JEM delegation to pack their bags and travel to the destination they want. After what, they were transferred to Addis Ababa airport and stayed for about an hour.

“Once again, the security forces came to the immigration office at the airport where JEM delegation was waiting and informed them that a decision was issued by the highest authorities to cancel their deportation and they are free to remain in Ethiopia. Following what they were transferred back to the hotel of the Sudanese delegations.”

Unconfirmed reports say that the deportation was caused by the participation of JEM leader on Saturday evening in a dinner organized by the Qatari embassy in Addis Ababa, but the SRF spokesman refused to comment on this information.

“I cannot provide any explanation for what the Ethiopian authorities have done, but the parties in Addis Ababa are currently meeting to consider this matter to take a unified position and issue a statement in this regard,” he said.