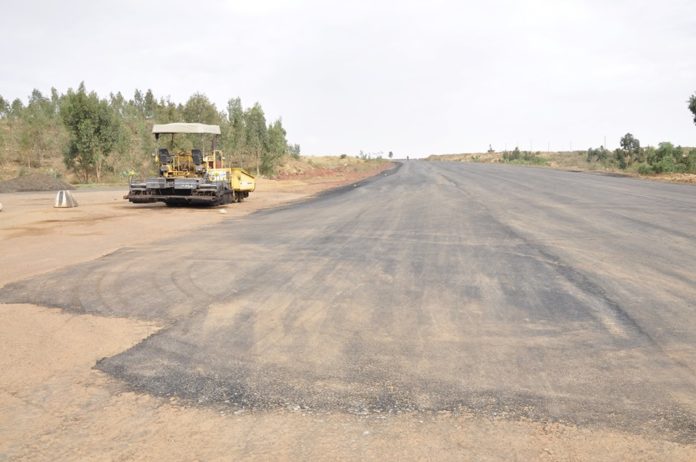 19 Aug 2019 – (Shabait) Almost 90% of the road renovation works in Eritrea that connects to Ethiopia has been done, and the remaining 10% of the task is expected to be completed in September (pictured).

The project is being carried out by a consortium of local construction companies including Adi-Halo, Segen, Gedem, keyeh-Bahri, Asbeco and Bdeho, as well as with the Eritrean Defense Force.

As a result, all the bridges on these roads have now been expanded up to 14 m and the roads up to 16 m.

On the Nefasit-Leayten road, three large bridges have been repaired and 11 new small bridges were built.

Meanwhile, the Dekemhare- Serha road is also going through the same renovation work. According to the coordinator of the project, Colonel Kflom Gergish, the project started in August 2018 through the road line of Degsa and they have managed to finish the work up to Egela. The roads are expanded and walls are built along the roadside. Similar to the other roads, the road has been expanded from 6 m to 12 m and about 25 new bridges have been built.

The Adi-Keih-Senafe road is being renovated by the concerted efforts of the Eritrean Defense Force, Asbeco Construction Company and Project Adi-Halo. The road has been expanded up to 20 m in the first phase and is expected to be covered with tar shortly.

Similarly, the Dekemhare-Tera Emni road is also expanded and repaired. The coordinator of the project, Mr Fetwi Zerea, said that the road was only 6 m wide in the past but has now been doubled to become 12 m. Mr Fetwi added that they have also built 25 new bridges. He emphasizes that they are accomplishing the project with their own skills based on the government’s policy of self-reliance.