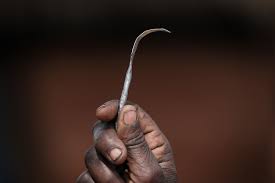 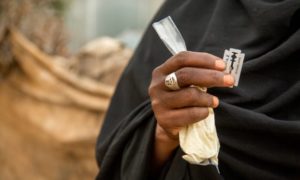 A FORMER FGM PRACTITIONER SHOWS A HOMEMADE TOOL FROM A NAIL USED FOR CUTTING, DURING THE MEETING OF AN ANTI-FGM WOMEN’S GROUP IN NORTHEAST UGANDA ON JANUARY 31, 2018. (YASUYOSHI CHIBA/AFP/GETTY IMAGES)

Three times in the past week, a girl has died in Somalia from complications associated with female genital mutilation (FGM). The most recent victim, 10-year-old Mumtaz Qorane, contracted tetanus after enduring the procedure a few days ago. Her death was reported on Monday.

Dr. Mohamed Hussein Aden said he received an emergency call about the Qorane’s dire condition while being interviewed on Sunday by Voice of America Somali about the death of two sisters, Asiya Farah Abdi Warsame, 10,  and 11-year-old Khadija Farah Abdi Warsame. The sisters both bled to death earlier in the week following FGM procedures performed across the border in Ethiopia.

“There is no other way to describe it, it’s brutal,” he said.

The deaths occurred just weeks after the Attorney General announced the nation’s first prosecution for FGM.

At the time, deputy prime minister Mahdi Mohamed Gulaid also spoke up, saying, “It is not acceptable that in the 21st century FGM is continuing in Somalia. It should not be part of our culture. It is definitely not part of the Islamic religion.”

Around 98 percent of women in Somalia reportedly undergo female genital mutilation, which involves removing part or all of the clitoris and labia for non-medical reasons, usually between the ages of five to nine. Most girls in Somalia undergo a severe form of circumcision, during which the labia are removed or repositioned and the vaginal opening is sewn up, leaving only a small hole through which to menstruate.