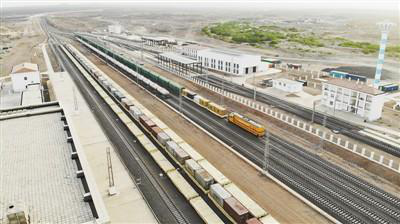 A series of projects contracted by Chinese companies, as part of their efforts to boost connectivity among the “Belt and Road” countries, have won more applause, with the China-constructed rail project connecting landlocked Ethiopia to Djibouti serving as one of the epitomes 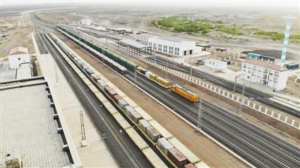 “The railway brings night-and-day difference,” said a Djiboutian passenger Abdul who has taken the line six times to go to Dire Dawa in eastern Ethiopia.

“I could only take buses to go to Dire Dawa before, and it took me 18 hours because of the poor conditions of the road. Now, I can arrive there 4 hours by the comfortable train carriages,” Abdul told People’s Daily.

Running a distance of 750 kilometers, the railway is Africa’s first and longest transnational electrified railway. It also marked the first time that a complete spectrum of a Chinese railway industry chain in Africa is fully backed by Chinese standards, including technology, equipment, financing, construction, supervision, operation and management.

In the first half of this year, the railway transported a total of 55,000 passengers and containers of over 17,000 twenty-foot equivalent units (TEUs), becoming an artery for passenger and freights between Ethiopia and Djibouti.

“I’m proud that Ethiopia has got such a railway,” said a university student in Dire Dawa. 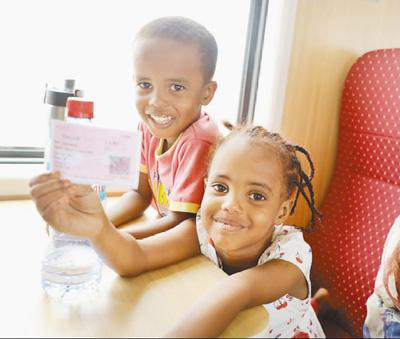 A little girl shows her ticket to People’s Daily reporter on a train running along the Addis Ababa–Djibouti railway. (Photo by Lv Qiang from People’s Daily)

In addition to receiving applause from the people of the two countries, the railway has also become a must-see destination for many visiting delegations. On June 15, diplomatic personnel of the EU, France and Nigeria in African Union boarded an Ethiopia-Djibouti train to learn about the railway and the industrial parks along the route.

The rail line is only one of the many projects constructed to boost infrastructure interconnectivity under the Belt and Road Initiative proposed five years ago. Chinese construction, over the years when more international arteries were undergoing accelerated construction, has been well-reputed overseas.

The high-speed rail was hailed as “the second technological innovation in Thailand’s railway history” by Thai Transport Minister Arkhom Termpittayapaisith.

The minister is very confident about China’s high-speed rail technology, saying that the high-speed rail will align Thailand with the construction of Belt and Road and thus facilitate regional economic development.

Employment of local residents and training of local talents were given importance by Chinese firms when launching overseas projects, which can be evidenced by the Port Qasim Coal-fired Power Plant, one of the first projects implemented within “Belt and Road” framework.

The project, built by Power Construction Corporation of China, employed over 3,000 Pakistani workers at its peak, and offered a six-month free technical training in China to 100 Pakistani operation and maintenance workers.

Such considerate design has offered adequate space for giraffes to walk through under the bridge that has a height ranging from 8 to 29 meters. In addition, the company has also built culverts in low-lying areas for animals like zebras to drink water.