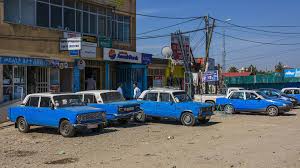 CCCC’s task is to rehabilitate 3 sq km between the suburbs of Entoto and Akaki in the north of the Ethiopian capital, Chinese news agency Xinhua reports.

However, the main element of the plan is to build concrete channels to intercept “liquid waste” flowing into Addis’ 56km of rivers and streams, and take it to treatment plants installed at intervals along the waterways. There will also be new flood defences, drinking fountains and borehole irrigation powered by solar panels.

It will be part of a $1bn three-year programme of work called “Beautifying Sheger” announced by   Prime Minister Abiy Ahmed during a fundraising dinner back in February. If all goes according to plan, the per capita green space in Addis will rise from 0.3 sq m to 7 sq m.

The hope is that improving the urban environment will encourage an increase in property values, the development of tourism, the attraction of investment, the growth of a green economy and the appearance of cafés and restaurants along the city’s rivers, according to a promotional video for the scheme.