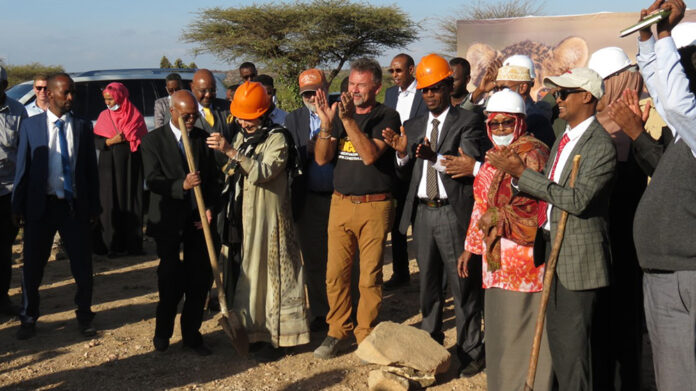 HARGEISA, Somaliland (26 December 2021) – Cheetah Conservation Fund (CCF), together with its partner, the Somaliland Ministry of Environment and Climate Change (MoECC), broke ground and laid the cornerstone for a new facility, the CCF Somaliland Cheetah Rescue and Conservation Centre (CRCC), on Thursday, 16 December 2021. The event marked the official launch of construction, which will take place in several phases unfolding over the coming year. When complete, the CRCC will provide a permanent home for cubs rescued from the illegal pet trade or human-wildlife conflict situations by the MoECC and placed in CCF’s care. The new facility will feature vast outdoor enclosures that provide a naturalistic environment for the animals, plus the CRCC will have a fully-equipped veterinary clinic and professionally trained staff that will live on-site to provide ongoing, world-class care.

“CCF is very pleased to be able to build this new facility for Somaliland, to help support both wildlife and people in this region”, said Dr Marker, CCF’s Founder and Executive Director. “When disrupting illegal wildlife trade in cheetah cubs for the pet trade, one of the problems conservationists must address is how to manage confiscated animals. The CRCC has been designed to meet the needs of this unique population. It will be the first facility of its kind in the Horn of Africa, the region where most cheetah confiscation events occur. The Ministry in Somaliland has been CCF’s best partner in addressing the illegal trade in cheetahs, and the development of the CRCC is a testament to the progress we are making”.

The CRCC is based on CCF’s world-renowned Centre in Otjiwarongo, Namibia, “The Cheetah Capital of the World”, and is intended to become a must-see destination in Somaliland. The new facility is set on more than 800 hectares at Geed-Deeble, a forest reserve about an hour’s drive from Hargeisa. Once complete, in addition to the cheetah sanctuary and clinic, the CRCC will include education and vocational training facilities that will benefit students, teachers, pastoralists, wildlife caregivers, eco-rangers, and local CRCC staff. And, the CRCC will be open for public tours, with the purpose of educating Somaliland people and international visitors about the country’s ecosystems and indigenous wildlife. 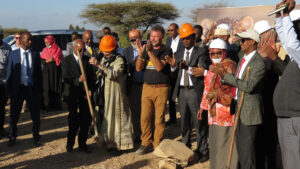 Caption: Dr Laurie Marker of Cheetah Conservation Fund hands the shovel to Somaliland’s Head of Mission to the USA, Ambassador Bashir Goth, during the ground-breaking ceremony on 16 December.

“I would like to express my gratitude to everyone here to mark this big day for all of Somaliland. We are making a permanent place to care for cheetahs that will be world-class. The Somaliland President, Muse Bihi Abdi, has made this plan, and I thank him for his good intention in working with us. I also want thank the CCF organisation for taking on the responsibility of caring for and feeding the cheetahs”, said Minister Shukri Haji Ismail, Ministry of Environment and Climate Change (MoECC).

CCF and the Ministry of Environment and Climate Change have signed a 30-year deal for CCF to develop the CRCC at Geed-Deeble. CCF is building the facility, and for three decades, CCF will operate the CRCC while training Somaliland people to work there. At the end of 30 years, CCF will hand over the facility to the Somaliland government for its people to operate into perpetuity.

CCF believes the way to make conservation impact in Africa sustainable is to train the next generation of Africans in leadership roles. CCF has a long history of training university students, post-graduates and early career professionals in biology, ecology, genetics, pastoralism, rangeland management and conservation of cheetahs. Through CRCC programming, CCF will transfer knowledge to Somaliland people, and the CRCC facilities for cheetahs will double as a training facilities to expand vocational opportunities for the nation’s youth.