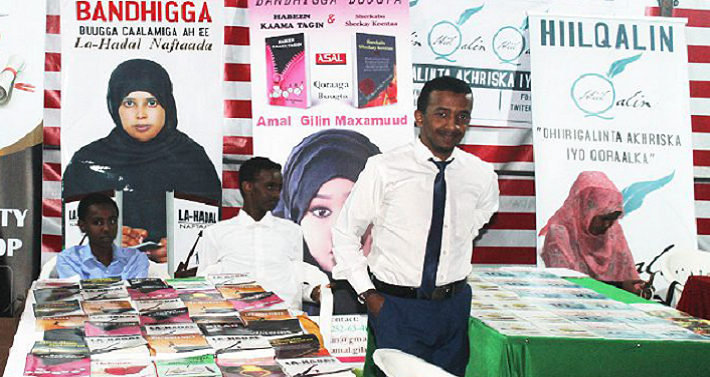 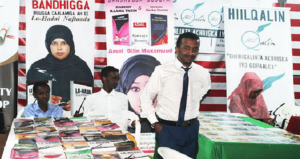 “Somaliland! Somaliland!” the women chant as they twirl around like whirling dervishes to the beating of drums by the older women. The drums beat louder and faster. Somaliland flags appear, and the crowd is worked into a frenzy.
In the capital of the country – a breakaway state since 1991 – that shares with Somalia the epithet “land of a thousand poets, the Hargeysa International Book Fair (HIBF) brings together writers, poets, curators, art and literature lovers from all over the world. In July, 2018’s fair launches with the theme ‘Wisdom’, towards enriching “a society that has survived within its own mechanism, culture, heritage and knowledge production”.
Dr. Jama Musse Jama, director of Redsea Cultural Foundation, which organises the HIBF, says the theme continues the fair’s tradition of promoting freedom of expression: “We are striving to create what was missing in this country for a long time: a platform where people can say what they want to say,” Jama says. “Creating a space for those who do not belong to the establishment. […] We are pushing the boundaries, knowing we are working in a tight environment.”
This edition of the fair comes at a time when freedom of speech is under threat. In January 2018 a Somalilander poet, Naciima Qorane, was arrested for calling for the reunification of Somalia and Somaliland in her poetry. “Her arrest was really unfortunate,” says Mohamed, a Somalilander writer speaking on condition of anonymity. “But to know why it happened at this particular time, one has to understand the geopolitics around it. We are in the centre of a race for supremacy in the Horn of Africa that is being led by Saudi Arabia, the UAE, Ethiopia and Turkey.”
Since Somaliland split from Somalia the country has enjoyed relative peace, but Mohamed suggests this is now challenged on account of its geography, wedged between the Horn and the Middle East. While Ethiopia increases its stake in ports along the coast, the Yemeni conflict has brought to light the powerplay between two new Middle Eastern blocs: Saudi Arabia, UAE and Egypt on one side; and Turkey, Iran and Qatar on the other.
With Somaliland not recognised by the UN, leaders are averse to what they perceive as challenges to the country’s autonomy. “The government’s arrest of Naciima was a direct reaction to these concerns. They fear any calls for reunification as we are trying to maintain our sovereignty,” Mohamed adds. Qorane was released in May after receiving a presidential pardon that followed a public demonstration against her arrest.
Organisations like Jama’s continue to contribute to the country’s rich culture of arts and literature through workshops, discussions, a travelling library and book translations into Somali.
“I still see my country as one that wants to maintain space for open discussions,” Mohamed says. “My hope is that the ongoing changes in the Horn of Africa will not be an excuse for taking away people’s freedom of speech and expression.”
This article first appeared in the July-August 2018 print edition of The Africa Report magazine