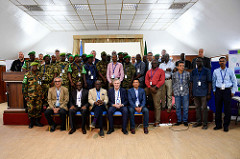 Mogadishu, 16 September 2018- The African Union Mission in Somalia (AMISOM) will enhance its use of modern technology during the transition period to ensure gains made in securing the country are not eroded.

The Deputy Special Representative of the Chairperson of the African Union Commission (DSRCC) for Somalia, Simon Mulongo, said Somalia’s stabilization process had reached a critical stage that needed more investment in modern technology, mainly force multipliers and enablers, to ensure no security gaps occur during the draw down phase.

The AU Mission has already withdrawn 1000 troops and more withdrawals are expected next year.

The two-day workshop discussed how technology can be applied to address logistical challenges faced in the battlefield and was attended by senior officials from UNSOS and AMISOM together with police and military focal point officers from the six Sectors.

Mr. Mulongo noted that the technology employed as force enablers and multipliers should be sustainable if they are to make a difference in the war against Al-Shabaab, especially during the transition period.

The director of United Nations Support Office in Somalia (UNSOS), Amadu Kamara, called for a coherent approach in the war against Al-Shabaab and pledged the UN agency’s continued support to AMISOM in its efforts to secure Somalia.

“The value of technology has to be within the context of a well-planned, thought-out and coherent approach to how we want to wage this battle and I think this is just a small beginning and I pledge the support of UNSOS within budgetary constraints and the realities of the fiscal to make sure that we give full support to help our noble and valiant AMISOM colleagues wage a winning battle,” the UNSOS director added.

His sentiments were echoed by the director of Information Communications and Technology Division (ICTD) at the UN headquarters, Anthony O’Mullane, who said he was in Mogadishu to understand the challenges AMISOM faces and the best technology to recommend.

The workshop also discussed the gaps associated with force protection and force projection capabilities and how they can be prevented.