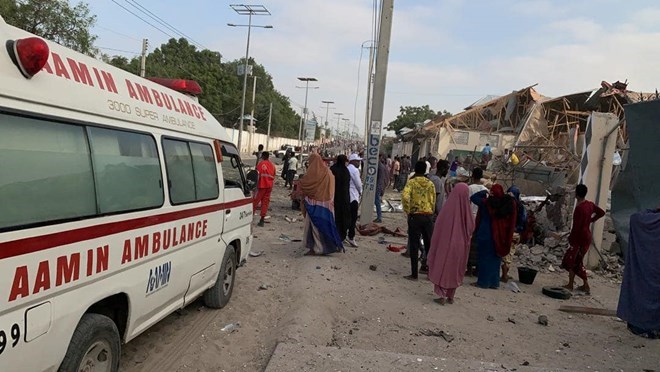 A suicide car bomb struck military convoy in Mogadishu on Thursday as Somalia is gearing up to hold its long-delayed parliamentary polls.

The sound of the huge explosion was heard through the city early on Thursday morning and videos shared on social media show a plume of smoke billowing into the sky.

The targeted military convoy was heading from General Gordon military training camp to the heavily fortified Halane base camp, which is a home to a number of foreign missions, including United State, United Nations and United Kingdom.

An extensive damage to building near the blast site could be seen in photos circulated in online showing the aftermath of the blast.

Local sources said the explosion hit an African Union convoy near the palace of the former president Abdiqasim Salad Hasan in the city’s Hodan district.

A number of people are said to have been killed in the blast though the exact number of casualties are not known.

Reports confirm that at least 17 people were wounded whilst 8 others were killed in the blast.