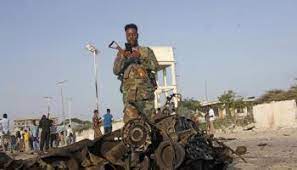 The armed Islamist group which has been waging an insurgency campaign to topple the Western-backed government based in Mogadishu for more than a decade has enjoyed revenue growth over the past years and collects more taxes than the federal government, according to a previous report.

Hiraal Institute said Al-Shabaab uses a range of methods to procure weapons from purchases from local black markets – to giving contracts to arms traders to buy and deliver weapons from overseas countries, including Yemen.

The Research Institute said nearly a quarter of Al-Shabaab’s budgets goes towards weapons purchases since the acquisition of guns, ammunition, explosives and other heavy weapons remains a major priority for the group.

“Out of an annually planned expenditure of approxi­mately USD 100 million, al-Shabab’s annual planned ex­penditure on arms procurement is assessed to be USD 24 million, budgeted monthly at USD 2 million,” the report said.

Insurgents have increased their attacks in Somalia over the past weeks amid ongoing parliamentary elections. Last week, militants carried out multiple simultaneous overnight raids on police and military camps in Mogadishu, destroying a police station and seizing vehicles.

On Monday, the leader of Puntland regional state Saeed Abdullahi Deni survived an assassination attempt after an apparent roadside blast targeted his motorcade near the commercial port city of Bosaso. Several traditional elders had been killed in another bomb attack in the town days earlier.

The research paper recommended the targeting of key bomb experts and individuals involved in the arms trade, among other measures, to disrupt Al-Shabaab’s increasing purchase of weapons.