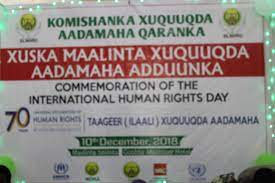 The public order and security law should be repealed and the police force completely overhauled.

The act of expressing grievances through a statement or action without resorting to violence is known as peaceful protest or non-violent resistance. This sort of protest has been used to advocate for a variety of causes, including human rights issues and voicing opposition to various political/governmental policies. Joining in a march or a sit-in, wearing a certain emblem, and passing out fliers are all examples of generic techniques.

When people are tense and want to hold peaceful rallies to express their grievances, the government suppresses peaceful protests in Somaliland, with police tightening security in the cities.

Drought and economic hardship as a result of climate change, as well as the pandemic, are now affecting Somaliland society.

Protests have erupted in recent days as a result of price hikes in public services, a lack of water, and increases in fuel and food prices. Furthermore, the opposition political parties are also using political triggers to manipulate the feelings of Somaliland’s poor people as part of their campaign..

Peaceful protests, on the other hand, are a human right guaranteed by both international instruments and the Somaliland constitution, which serves as the country’s supreme law.

Rather than listening to peaceful protesters, the government has taken steps to suppress or stop them in accordance with the Law on Maintenance of Public Order and Security. (Law No. 51/2012). The government’s claim that the protests are causing problems is false, because when political parties compete, they hold rallies attended by tens of thousands of supporters, and we have never witnessed any insecurity as a result of these events.

Therefore, labelling people who are protesting rising food and water prices as violent creators is incorrect in order to prevent them from amplifying their grievances and expressing their opinions.

Residents are required by law to seek permission from the government before complaining about their living conditions or exercising their right to free expression. In contrast, the country’s constitution allows citizens to openly express their opinions and feelings as a group or individually, regardless of the nature of those opinions and feelings.

However, this law (Law No. 51/2012), which went into effect in 2012, restricts or prohibits citizens’ rights by violating the constitution. It is critical to emphasize that the President or any other government branch cannot amend the Constitution’s human rights provisions.

This special law reminds us of the authoritarian government that ruled Somalia in the 1970s and 1980s by depriving individuals of their constitutional rights, and it violates the good faith of the people who voted in the constitution.

The most senior police officers do not apply laws in accordance with the constitution and international human rights instruments because of their experience under Siad Barre’s totalitarian regime. They had worked for the dictatorship that deposed the civilian government in 1969 and declared the country’s constitution null and void in order to violate basic human rights and facilitate detention, oppression, torture, confinement, and deprivation of liberty. This eventually led to people rebelling against the regime, and after massive civilian casualties and genocide, Somaliland people regained their independence, giving birth to today’s Somaliland.

According to Somaliland’s constitution, the value of human life is associated with the protection of fundamental human rights and freedoms and it is due to the fact that the constitution guarantees all of these fundamental rights that administrative, judicial, or special laws cannot violate or obstruct them

According to freedom house report 2021, the constitution allows for freedom of assembly, but organized public demonstrations are infrequent, and the authorities have sometimes employed violence to disperse protests.

Peaceful demonstrations, which the government claims are causing turbulence and problems, are not valid points. When the government wants to gain support for its policies and actions, it mobilizes various segments of society to protest; however, if the protests are directed at the government, it considers them a security violation.

In comparison to its unstable Horn of Africa neighbours, Somaliland boasts a good democratic reputation.

Despite security forces harassing and detaining some opposition candidates during the campaign, Somaliland took a significant stride toward stable democracy with parliamentary and local council elections on May last year, demonstrating the robustness of Somaliland’s democratic culture.

The promotion and preservation of human rights and fundamental freedoms is the primary foundation on which the government can assert its democracy; thus, the maintenance of public order and security act should be repealed and the police forces completely overhauled.