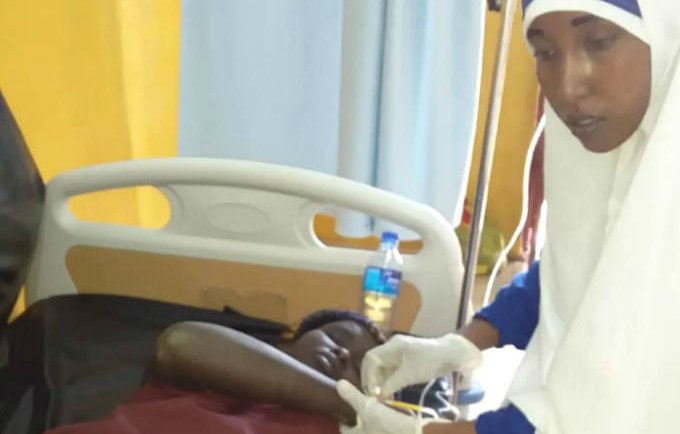 Jamila Garad Ali, 23, is devastated; 11 women from just one rural Somali village, Tulo Ano, died of pregnancy-related causes during the first week of October alone. As a professional midwife who works in the closest facility in Guri’el, they came to her for help but it was too late.

I have faced a real maternal mortality crisis. All the 11 mothers came seeking care from me but I couldn’t save them. They all died as a result of their complications, having reached professional care too late,” said Jamila, who works voluntarily for her community without pay.

Somalia already has one of the highest maternal mortality rates in the world, with one in every 22 mothers dying from pregnancy related causes. This had never been so apparent in Guri’el, in the Galguduud region of Galmudug state until this month, according to Jamila.
The young midwife only graduated in December 2017 as one of the first qualified midwives working in the area from Dhusmareb, a school run by the Ministry of Health funded by the People of Japan through UNFPA.  She is a focal person of the Somali Midwifery Association in Guri’el and leads a group of other midwives.

Each of the 11 mothers had arrived after prolonged labour as they tried to manage the births themselves at home with unskilled traditional birth attendants. The warning signs and opportunities to manage the labour effectively were missed, and each mother was in a very bad state before the family brought them to seek professional care,” explained Jamila.

One mother from Tulo Ano bled excessively at the hands of a traditional birth attendant who mishandled the placenta, according to Jamila. “The mother arrived with her family to seek help from me but she was already struggling to breathe. Having lost excessive amounts of blood, she needed a blood transfusion to save her life. One of her relatives who accompanied her was found to be the correct blood type, and was willing to donate blood to save her life, but it was too late to save her by then,” said the midwife.
There was no bag to collect the blood donation available in the facility to be able to give the life saving treatment to the dying mother. “She passed away soon after, leaving seven children without a mother,” the young midwife sadly said.
Jamila, together with other midwifery graduates, has been carrying out community awareness on midwifery services and skills since she returned to her home area as a volunteer after her graduation. The midwives frequently conduct outreach services to access the hard to reach communities and ensure that families know about the professional midwifery care that is available. “We walk up to five hours to reach some villages to be sure that awareness reaches all,” she said.
Hawa Abdullahi Elmi, the Principal at the Mogadishu Midwifery Training Institute who also leads midwifery in the Ministry of Health in the Federal Government of Somalia, said midwives like Jamila have the professional skills to prevent and manage complications in pregnancy and birth, but that many families reach them too late when services are so few and far between as is the case in most parts of Somalia.
“The sheer numbers of maternal deaths in one area in just one week shows how much more remains to be done in order to end preventable maternal deaths. Lives can only be saved with the right equipment in the hands of well supported trained professionals,” said Hawa.
In Guri’el, volunteer professional midwives are striving to give appropriate and life saving care and raise awareness of their services to be able to assist more mothers in pregnancy and birth, according to Hawa. “But without the right equipment, lives will still be lost, and without pay, midwives may not be able to stay in the area for long. Investment in midwifery care and appropriate health system infrastructure could save lives, and end preventable maternal deaths,” she said.
——Emily Denness