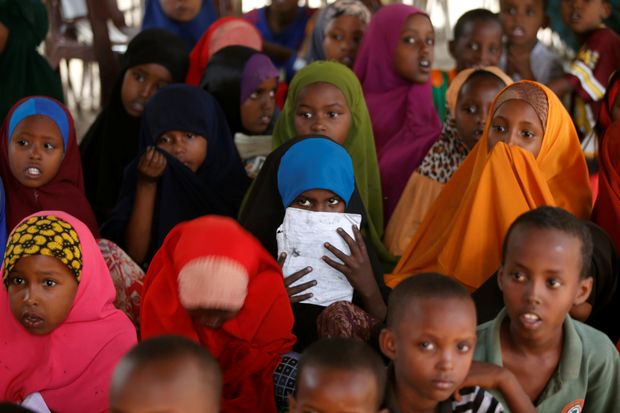 The United Nations refugee agency is asking Canada to resettle more refugees from the Horn of Africa, emphasizing the needs of particularly vulnerable Somalis displaced by a decades-long conflict in the war-torn country.

Mohamed Abdi Affey, the special envoy of the United Nations High Commissioner for Refugees for the Horn of Africa, is in Ottawa this week to brief parliamentarians and senior government officials on the protracted refugee crisis in the East African region. He said the more than one million Somali refugees in the area – many of whom have lived in the Kenya’s massive Dadaab refugee camp for as long as 27 years – cannot be forgotten as the world is distracted by other crises.

“The Somalia refugee crisis risks being forgotten as a crisis because of global competing attention for other emergency situations in Syria, in Yemen, in South Sudan,” Mr. Affey said in an interview with The Globe and Mail Wednesday. “Part of my role has been to refocus attention and seek solutions.”

One of the UNHCR’s proposed solutions is asking countries like Canada to accept more Somali refugees, particularly the most vulnerable, such as those with medical emergencies and single mothers. Mr. Affey took that request directly to Immigration Minister Ahmed Hussen, who came to Canada as a Somali refugee when he was a teenager.

“The minister has graciously welcomed the idea that as a country Canada continues to lead in this effort and that we are hoping in the years ahead … the numbers will continue to improve,” Mr. Affey said, describing his meeting with the minister this week. Mr. Hussen did not respond to The Globe’s request for an interview.

Somalia has been engulfed in a civil war since 1991 when the military regime of then-president Siad Barre was overthrown. The conflict, compounded by drought and other natural disasters in the East African country, has created one of the longest-running refugee crises in world. Meanwhile, more than 2.6 million people are displaced within Somalia itself, according to the UNHCR.

The UNHCR’s representative to Canada, Jean-Nicolas Beuze, said his agency will not tell the government how many Somali refugees it should resettle, but underlined the overwhelming global need as the world faces an unprecedented refugee crisis. Of the 25.4 million refugees worldwide, the UNHCR says less than 1 per cent will be resettled to a third country such as Canada.

Canada has seen a steady increase in the number of asylum claims from Somalia over the past five years, according to statistics from the federal Immigration and Refugee Board (IRB). In 2013, 257 Somali refugee claims were referred to the IRB and 90 were approved; those numbers gradually climbed to 771 referred claims and 317 approvals in 2017.

Between January and June of this year, the IRB saw 286 Somali refugee claims and approved 207 cases; more recent statistics were unavailable. Somali asylum claims are on track to account for a small portion of the 43,000 refugees the federal government plans to resettle this year.

Beyond resettling more Somali refugees, Mr. Affey also encouraged the Canadian government to continue investing foreign-aid dollars in the Horn of Africa − Somalia, Ethiopia, Eritrea and Djibouti – and other surrounding countries hosting Somali refugees, such as Kenya and Yemen. For instance, he said investments in educational opportunities for refugees – particularly vulnerable girls – are critical for the stability of the region.

“The youth bulk in the camps … if not addressed, they could be radicalized by dangerous groups in the region, including al-Shabab, therefore becoming a threat to international peace and security,” Mr. Affey said.

Canada led the unveiling of a $3.8-billion investment in girls’ education at the Group of Seven leaders’ summit in Quebec in June, which experts called the single largest investment in the education for women and girls in conflict and crisis situations ever.