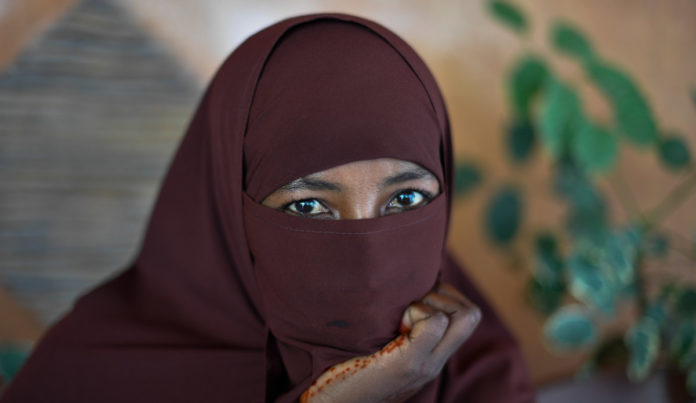 Mogadishu – On a cloudy Saturday morning in Mogadishu, 28-year-old Warsan Said Mohamed (not her real name) quietly enters the Hawa Taako 1 Centre in the Zoobe area of the Somali capital. The gender-based violence (GBV) survivor has an urgent appointment with her counselor, Fardowsa Farah, who has been treating her for the past two months. A resident of Gani, an internally displaced persons camp, in the Hodan district of Mogadishu, Ms. Mohamed is one of the many patients receiving comprehensive survivor-centred support – comprising medical, psycho-social and legal assistance – to help her recover from the trauma of sexual violence.

Her story is heart-rending. On the evening of April 28 of this year, three men attacked Ms. Mohamed while she was walking down a narrow street. They forced her into a waiting bajaj (rickshaw) and drove off. The hooligans then dumped an unconscious Warsan along another road in the Hodan district on the following day after they had sexually assaulted her for more than 15 hours. Some Good Samaritan passersby found Ms. Mohamed and took her to a nearby hospital for specialised treatment. She was later referred to Hawa Taako 1 Centre, which is managed by Save Somali Women and Children (SSWC), a local non-governmental organisation (NGO) that aids victims of GBV.

Warsan hopes to join other survivors who are now receiving livelihood support, which encompasses vocational training, cash for work and small-scale business start-ups, once her therapy sessions have ended. The women rights activist Amina Hajji Elmi who founded SSWC says gender-based violence is still rampant in Somalia and continues to devastate the lives of many women and girls.

“Gender-based violence in conflict must be tackled by all means for the benefit of Somalia’s women and children,” says Ms. Elmi, whose organisation manages four other Hawa Taako centres in the Somali cities of Afgoye, Baidoa, Galkayo and Kismayo.

She traces the problem of sexual violence in conflict back to the collapse of the Siad Barre regime in 1991, which triggered the outbreak of a decades-long civil war that left women and children particularly vulnerable to various types of crime.

“When lawlessness and anarchy engulfed Somalia, women and children became easy targets. As one of the women who remained in the country, we witnessed many gruesome incidents. Hence we decided to come up with the initiative of creating a one-stop centre to support gender-based violence survivors,” explains Ms. Elmi, who has been supporting survivors for more than two decades.

The establishment of one-stop centres has been crucial in helping survivors to overcome the physical injuries and psychological trauma associated with gender-based violence. The Mogadishu-based Hawa Taako Centre 1 alone has treated more than 2,000 GBV victims in the past decade.

However, despite the benefits of the one-stop centres, GBV still remains endemic in the Horn of Africa country.

Data from the Gender-Based Violence Information Management System (GBVIMS), a global database on sexual violence in conflict managed by a group of United Nations agencies and international NGOs, found the number of rape cases reported in Somalia last year to have been 1,361. However, the actual figure is believed to be higher as many cases go unreported due to the fear of stigmatisation.

The vulnerability of internally displaced persons

According to GBVIMS, internally displaced persons (IDPs) remain the most vulnerable, accounting for 87 percent of all the reported cases of sexual violence in 2018, with women and children being the main victims.

By way of illustration, women and girls accounted for 98 percent of the reported incidents of gender-based sexual violence in the fourth quarter of last year, compared to 95 percent during the same period in 2017.

Ms. Elmi says the limited access of IDPs to basic items and services like food, shelter and education exposes them to gender-based violence. She vividly remembers an incident that took place in one of the IDP camps in 2012 in which a man under the influence of illicit drugs poured hot cooking oil on his wife, leaving her with severe burns.

“What really irks me is the man did not even consider the fact that the wife was using the cooking oil to cook dinner for him,” adds the SSWC founder.

A comprehensive approach to help survivors

While the task of curbing GBV is a mammoth one, Ms. Elmi and her colleagues in civil society are stepping up their efforts to combat the scourge, which continues to threaten the well-being of Somalia’s women and girls.

“Safeguarding the rights of the victim is our main aim. We have established a service map in all the regions so that focal persons and case managers can easily identify recovery centers for the victims,” explains Abdinasir Nur, a protection coordinator with the Organisation for Somalis’ Protection and Development (OSPAD), who works closely with Ms. Elmi.

The two organisations cooperate to ensure that victims receive comprehensive support before resuming their normal lives.

“Our approach involves providing legal, medical and psycho-social aid to victims of sexual violence and other gender-based crimes. It is survivor-centred to ensure that victims regain their lives,” says Mr. Nur.

The two organisations have established hotlines and GBV desks in recovery centers to reach more victims in various parts of the country.

In addition, the organisations send field monitors and focal persons to IDP camps and villages where sexual violence cases are commonplace in order to contact more victims.

How does the system work?

According to Ms. Elmi, when a case involving sexual violence is reported to SSWC, either through referrals or the direct admission of survivors by focal persons and field monitors, its GBV centers will initially provide medical support, which includes administering first aid and pre-exposure prophylaxis treatment to prevent the victim from contracting HIV.

The victim is also given anti-pregnancy pills within 72 hours of the incident. The survivor then undergoes counselling which can last for more than a month, depending on her needs.

Statistics compiled by GBVIMS show that the number of patients who benefited from medical and psycho-social aid nationwide was 4,183 and 2,399, respectively. Women rights activists fear the number of victims seeking such assistance may continue to rise if stringent measures are not taken to address the problem.

The survivor-centered approach also involves seeking legal justice for the victims. For example, the two organisations work closely with security officers in tracking down the perpetrators, and they will even hire lawyers to file cases in court on behalf of the survivors.

However, Mr. Nur concedes that the legal approach faces many challenges, partly due to Somalia’s weak justice system and also pressure from clan elders who prefer to settle such cases through traditional grassroots systems of justice.

“There are times when victims have been forced to abandon the legal option due to sustained threats by the accused and his clan, leading to the collapse of cases already in court,” he observes.

Other challenges include a scarcity of professional psychologists and trained counselors who can offer quality counselling services to survivors.

As Somalia joins the rest of the world in marking the International Day for the Elimination of Sexual Violence in Conflict, Ms. Elmi and Mr. Nur hope the Federal Parliament will soon approve the Sexual Offences Bill that was endorsed early last year by the federal Council of Ministers.

The landmark bill would criminalise various forms of sexual offences, provide vital support to victims, and also define the roles and responsibilities of those authorities who investigate and prosecute the offences.