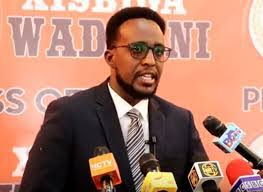 The Main Opposition party of Somaliland has strongly condemned some of the country ministries’ director generals who attended the fourth general convention of the ruling party. Waddani demands legal action to be taken against them.

Mohamed Saddiq Dhamme, the Secretary of Social Affairs of the Waddani, said it was unconstitutional for ministry directors to intentionally attend the recently concluded general convention of Kulmiye which is the ruling party of Somaliland.

He has confirmed their political party has submitted a list of public servants including the Ministries directors to the country’s civil service commission so as to take legal action against them. Though he did not reveal their names to the public.

The Secretary of Social Affairs of Waddani highlighted that Kulmiye, the ruling party of Somaliland has trampled on the country’s rules and regulations.

‘As a political party, we have presented a list of names of people who are public servants; including ministries’ directors to the country’s civil service commission. These people attended the fourth general convention of Kulmiye party.’

He said that the civil service commission previously fired some of the public servants for expressing their opinions on social media and now they wait to see the Civic Service Commission’s decision on this matter.