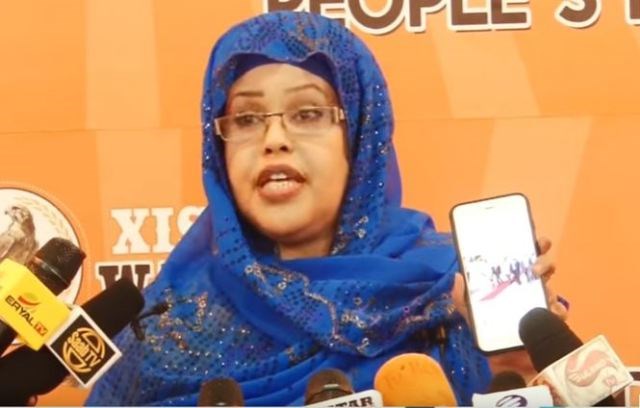 HARGEISA– Wadani Opposition party in Somaliland has strongly protested against Ethiopia calling Somaliland as an administration and this happened during the official visit embarked upon by SL leader to Addis Ababa where his delegation met with Ethiopian PM, Abiy Ahmed.

The Secretary in charge for foreign affairs, Ms. Fatumo Said has called on President Bihi to respond to the whys he accepted being called as regional administration in Somalia.

The secretary has quoted the press release from Ethiopia on the courtesy call of Somaliland delegation. Ms. Fatumo went on to say that President Bihi has accepted Ethiopia’s proposal which calls on Somaliland to work with Somalia. Ms. Fatumo has appealed to President Bihi if Somaliland has abandoned its long fought aspiration to seek recognition from the world as an independent state. The secretary for foreign affairs has said that there are a lot of ambiguity in the visit and that need a clarification from Somaliland government. The Interior MInister, Mr. Mohamed Kahin yesterday responding to the question why Ethiopia calls Somaliland as an administration. Mr. Kahin responded that there is no problem as big nations are also used the same term.