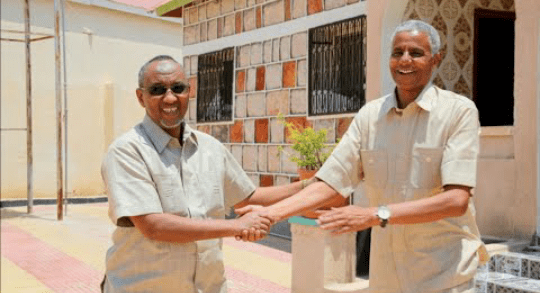 The leader of the opposition Wadani party, Hirsi Ali Haji Hassan and the former presidential affairs minister during Silanyo’s administration, Mohmud Hashi Abdi have held their first face to face meeting in Hargeisa on Wednesday.

The two politicians have not disclosed to the press the focus of their meetings and issued that they have discussed.

The duo only allowed the media to take photos from them.

Former minister, Ali Said Raygal who served as minister during Silanyo’s administration was in attendance of the high level meeting between the two former foes who know become friends and decided to bury the hatchet.

It is reported that the two former ministers have discussed their political ambitions and to join forces and become united.

The three former government ministers hail from the same region.