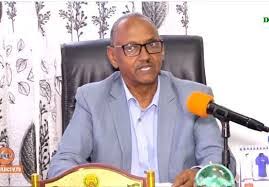 Somaliland Minister of Commerce has leveled accusations against the Vice President that he is not ready to face free and fair completion in the upcoming Kulmiye party 4th convention.

The minister who is also aspiring to win as the fourth deputy chairman of Kulmiye party, the same position the VP is also running for, said that he is ready to challenge the country’s VP for the leadership race of the party.

Mohmud Saed Sajin, the commerce minister has strongly accused the VP Abdirahman Sayli for being unprepared to challenge his competitors in the upcoming Kulmiye grand convention which is scheduled to take place in early October.

In his remarks during briefing the media, the minister stressed that there was an effort for mediation him and the VP but later on failed after the VP insisted on that no one should contest against him as fourth chairman of the ruling party Kulmiye.

Sajin affirmed he will not give up to run for the post whatever it takes to him and is ready to challenge the VP on the party’s election day.

He also reiterated the political dispute will not have affect the current situation of the country.

Somaliland’s ruling party declared to hold its much awaited 4th grand convention on the 4th of October this year.

Somaliland ruling party Kulmiye postponed holding its convention due to spread of the coronavirus in Somaliland.

Kulmiye party was founded in 2002 and it has been the ruling party for decades after it came to power in 2010.