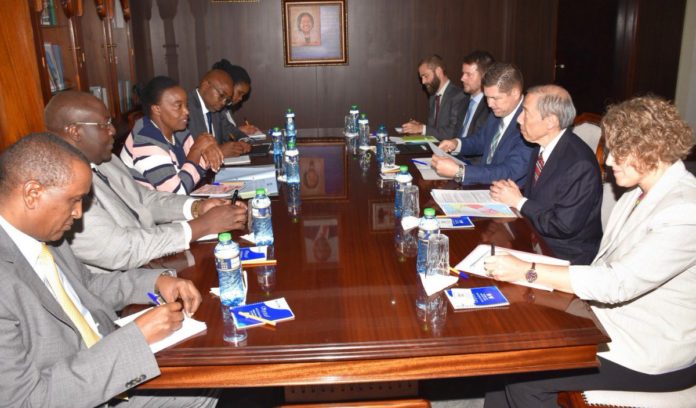 The US has been drawn into the murky waters of the Kenya-Somalia diplomatic row over the ocean boundary dispute.

Yamamoto is one of the highest-level US ambassadors on the African continent, and until his appointment as head of US mission in Somalia, served as acting Assistant Secretary for the Bureau of African Affairs.

This meeting comes just days after the Arab Parliament, in a tweet shared by the Ministry of Foreign Affairs, told Kenya to keep off Somalia territorial waters.

“The #Arab Parliament calls on #Kenya to stop its hands on #Somali territorial waters, which are an integral part of the Arab waters, and rejects its false pretensions to draw up a new, unfounded map while rejecting its threats to interfere in #Somalia‘s internal affairs,” the MFA Somalia tweeted.

The government of Kenya, through spokesperson Cyrus Oguna, dismissed the communication and termed it as propaganda, saying “Nairobi expects Somalia’s propaganda machinery to be in full swing including use of political bodies to drive rhetoric”.

“The public should, therefore, be prepared and is urged to treat such articles with the contempt they deserve,” Col (Rtd) Oguna said on Friday.

MFA Somalia is yet to pull down the tweet.

Kenya and Somalia have been involved in a maritime dispute since 2014, when Mogadishu filed a case against Nairobi at the International Court of Justice. The hearing is due to start in September, although Kenya prefers political negotiations to the court process.

ICJ’s decision is binding and final.

The new developments point to a fight for the geopolitical interests in the Horn of Africa, particularly Somalia.

Already, there is an existing battle for access to seaports in Somalia between Saudi Arabia and the United Arab Emirates on one side, and Qatar backed by Turkey on the other.

According to a report by Reuters in May 2018, Saudi Arabia and the UAE increasingly view the Somali coastline — and Djibouti and Eritrea to the north — as their “western security flank”, according to a senior western diplomat in the Horn of Africa region.

Somalia, UAE, Qatar, Djibouti, Saudi Arabia are among states that have members in the Arab Parliament.

The oil blocks that are at the centre of the current Kenya-Somalia row complicate the matter further, with UK, Norway and Turkey being among the interested parties.

Yamamoto was appointed as the US resumed a permanent diplomatic presence in Mogadishu after an absence of nearly 30 years, until then working from the US Embassy in Nairobi.

The Somali-Norwegian Prime Minister is spearheading the auction and has had interests in Soma Gas and Oil, where he was executive director for Africa until he resigned in 2017.

Soma Gas and Oil is a private oil company that explores natural resources in Somalia. It’s registered in London. In 2013, it signed a contract in Somalia with the government to collect data on onshore and offshore oil. In exchange, the company had the right to apply for up to 12 oil blocks.