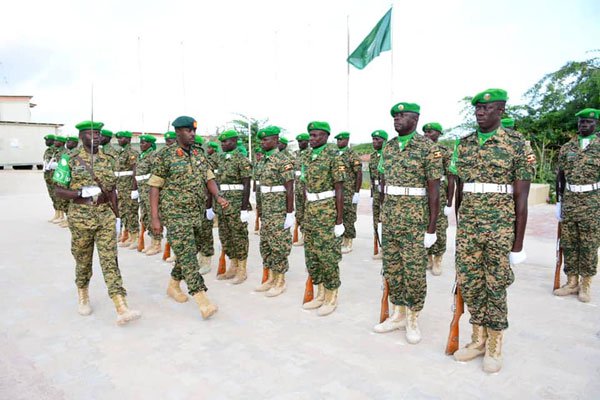 Mogadishu. Uganda’s Chief of the Defence Forces (CDF), General David Muhoozi is in Somalia on a routine visit to Ugandan troops deployed in the country, under the African Union Mission in Somalia (AMISOM).

Gen. Muhoozi met with the AU Special Representative for Somalia and Head of AMISOM, Ambassador Francisco Caetano Madeira on Friday, where the two discussed the progress made in the transitioning of national security responsibilities to the Somali National Security Forces.

He added, “Uganda happens to be one of them and we are proud to contribute to the peace and security of Somalia.”

The Uganda CDF commended troops from all the Troop Contributing Countries to AMISOM, for their efforts in the degradation of Al-Shabaab extremists and lauded AMISOM for extending the “frontiers of peace and liberation, and fostering development”, in the Horn of Africa country.

On his part, Ambassador Madeira said the visit by Gen. Muhoozi offers reassurance to the Mission leadership and troops.  “We talked about how we can move ahead in the coming times. How we can, together, implement the transition, (and) Resolution 2431 of the UN Security Council, which gives us the mandate up to May next year,” remarked Ambassador Madeira.

The leaders discussed planned joint military operations with the Somali security forces. “We both agreed that we need to continue to move together, we need to ensure that Somali troops are ready to take over from us. We need also, to make sure that Al-Shabaab is further degraded,” he said.

The Head of AMISOM stated that the troops would soon embark on operations to free new areas, which are currently occupied by extremists.  “Most importantly, we need to create space for the Government to occupy and be present in much wider areas than it is currently and make sure that the checkpoints and tax collection points by Al-Shabaab are dismantled.”

“Leego, sooner than later, will be back into the hands of the Government,” he noted.

Al-Shabaab took over control of Leego in Lower Shabelle region in August 2017, after AMISOM troops withdrew from a Forward Operating Base, situated in the area.  The town lies about 120 km southwest of Mogadishu and is of strategic importance to Somalia, because it links Mogadishu to the western regions of Bay and Bakool.

Gen. Muhoozi who is on a two-day working visit to Somalia also held discussions with the AMISOM Deputy Force Commander in-charge of Operations and Plans, Major General Charles Tai Gituai and AMISOM staff officers, at the Force Headquarters.

“We have just finished working on the Concept of Operations (CONOPs) and some of the issues that are in the CONOPs are very specific, because they are dealing with the UN Security Council Resolution 2431 and of course the Somali Transition Plan and the issues that have been raised there, are that, we should be able to focus on the priority areas,” explained Maj. Gen. Gituai after their meeting, adding that AMISOM was already working on those priority areas.

“So we have briefed the CDF on all those issues, so that he is able to understand exactly where we are, and where we are going.” he stated.

Gen. Muhoozi’s visit to Somalia comes at a time when Ugandan troops under Battle Group XXIII (UGABAG XXIII) are winding up their one-year tour of duty and preparing to hand over to a new Battle Group XXVI (UGABAG XXVI).