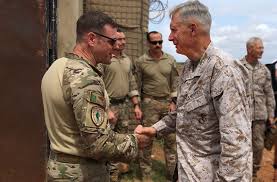 WASHINGTON — The U.S. Army has authorized the wearing of the combat patch — officially known as the “shoulder sleeve insignia for former wartime service” — for Soldiers who have been deployed, temporarily stationed or permanently assigned to Somalia since 2004 and who received combat zone tax exclusion plus hostile fire pay and/or imminent danger pay.

“The shoulder sleeve insignia is a unique Army tradition that distinguishes Soldiers who have served in areas of combat, and our Soldiers in Somalia have certainly earned this recognition,” said Gen. James McConville, Chief of Staff of the Army.

The combat patch has been a symbol of military service during combat operations since World War I and continues to this day to serve as an emblem of personal sacrifice.

The patch, which is worn on the right sleeve of the uniform just below the American flag, signifies deployment in a combat zone. Combat veterans are authorized to permanently wear the patch on their uniforms.

Soldiers who have deployed to Somalia can begin wearing the combat patch immediately as long as they have the proper documentation to support their eligibility (military orders plus CZTE, HFP and/or IDP).

The Army regularly updates authorization for combat patch wear; updated language specific to this shoulder sleeve insignia will appear in the new edition of AR 670-1.