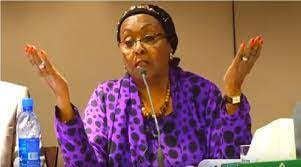 Dr. Adna Aden, a prominent and former SL Foreign Affairs Minister, has confirmed that two of her staffers carrying with SL travel documents were arrested in Mogadishu. She said two medical doctors were travelling to Kenya. The government of Somalia has not so far commented on this matter. She has strongly condemned with the strongest possible terms the move and described it as an acceptable. She added that it is against the int’l law to violate the transit passengers rights. The two medical doctors names have not been identified but the Somali government deported back to Somaliland. Dr. Adna said: ” The two staffers were in transit in Mogadishu. Their destination was not there. They were heading to Kenya. Security forces entered the plane to check passenger passports. The two staffers with SL travel documents were unloaded and detained.” Somalia’s government has not so far issued a statement on the matter. The two countries separated in 1991 after Somaliland unliterally seceded from Somalia after it was dissatisfied with the union. The two countries have strained ties as the countries have not diplomatic ties. Somaliland detained several prominent figures including singers who travelled to Mogadishu.