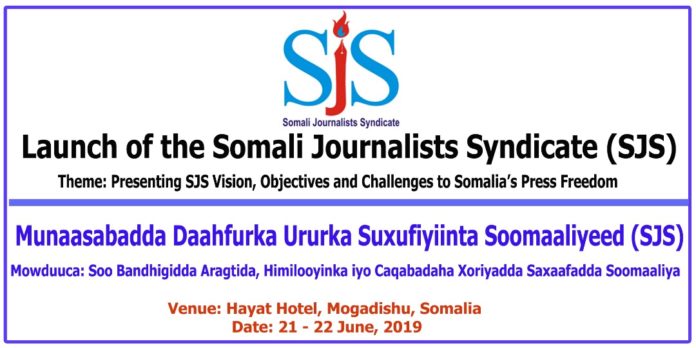 Founding members of the Somali Journalists Syndicate (SJS) gathered in Mogadishu for a two-day General Congress, vote for the Constitution, approve strategic action plan for 2019 – 2022, the budget and elect the office bearers.

The delegates who traveled from various regions from Somalia unanimously voted for the constitution, adopted Strategic action plan, approved the budget and membership form and elected 7 executive committee members who will lead SJS in the next five years.

9- And Abdirahman Hassan Omar was nominated as Legal Advisor.

Mr. Mohamed Ibrahim (Bakistaan),  who was elected in absentia thanked for the founding congress for electing him in absentia, underscoring the profound experience in trade union activity and press freedom.

”I am honoured to accept to be elected as SJS President” Mohamed Ibrahim said while taking part the conference via telephone, ”This is very important day for Somali journalists and I hope that our commitment and working together as a group will make a difference in Somalia’s looming press freedom.”

”There is no other time important than today to stand for the rights of the journalists and the media operation in Somalia. SJS stands to be at the forefront in advocating for a better and safer working environment for journalists,” Omar Dhere said.

SJS Secretary-General, Mr. Abdalle Ahmed Mumin has called for unity among journalists as he also called for the authorities to guarantee independence of the media, bring media legislation in line with the provisional Federal Constitution and international human rights standards, and repeal laws criminalizing the dissemination of critical reporting.

”Somali journalists  have endured a lot. They need protection and safety. We call authorities to be mindful that a free and fearless media is the only solution to a health society.” Mr. Mumin said during his closing speech.

”The new media law currently on the table of the Federal Parliament should guarantee freedom of the press as enshrined in the Federal Provisional Constitution.” he added.

Shortly after the election, the Executive committee of the Somali Journalists Syndicate (SJS) has held a side meeting on Friday afternoon with a group of Somali photojournalists and camerapersons who congratualed the newly elected SJS officials and presented the challenges they have faced in their day-to-day duties.

The two-day Congress meeting will be concluded on Saturday afternoon at Hayat Hotel in Mogadishu during which the official launch will be held. Among the dignitaries invited to the launch of the Somali Journalists Syndicate include leading civil society organizations, media representatives, journalists and government officials.