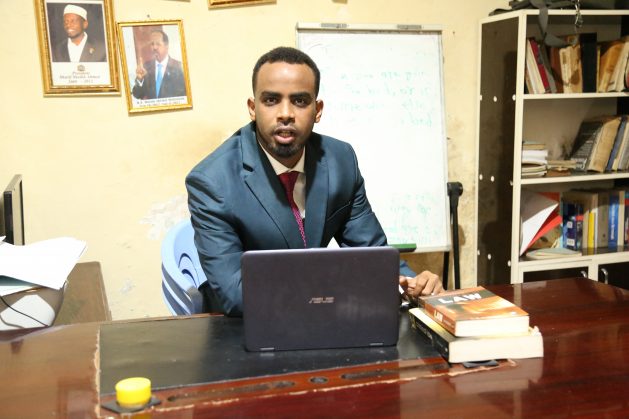 Head of the Department for the Fight Against Smuggling and Human Trafficking, Abdiwakil Abdullahi Mohamud told IPS that pointed out that it was not possible to control all Somalia’s borders as they had limited resources available. Credit: Shafi’i Mohyaddin Abokar/IPS

MOGADISHU, May 28 2020 (IPS) – While simultaneously suffering from the coronavirus pandemic, flooding and a locust crisis, Somalia, could well see a rise in the number of people who are susceptible to human trafficking.

According to the United Nation’s Office for the Coordination of Humanitarian Affairs, the rainy season in Gu resulted in twice the average rainfall, causing floods across this East African nation, affecting almost a million people and displacing over 400,000 people.

“As more people find themselves in vulnerable circumstances as a result of displacement from floods, drought and conflict, it is assumed that some of them are likely to seek “greener pastures” it is anticipated that in this state of vulnerability they could become susceptible to human trafficking and exploitation,” Isaac Munyae, Programme Manager for Migrant Protection and Assistance at the International Organisation for Migration (IOM) Somalia, told IPS over email.

This Horn of Africa nation is considered a source, transit and destination country for trafficking in the region and each year a unknown number of migrants pass through the country’s borders. According to Federal Government of Somalia (FGS) officials, trafficking has been rampant in the country for decades.

“Many Somalis are trafficked across the borders and are often moving along the southern and northern routes through Sudan, South Sudan and Kenya. On the other hand there are some Somalis  and a lot of Ethiopians travelling to Yemen along the eastern route that pass through Somalia and also fall prey to exploitation,” Munyae said.

The IOM added that the COVID-19 outbreak — Somalia has some 1,711 confirmed cases as of May 27 — “poses an additional challenge in an already fragile context where it may further hinder access to basic services, leaving the population highly vulnerable”.

• According to the U.N. Refugee Agency, the country has some 2.6 million displaced people.

• Since the start of this year, more than 220,000 Somalis were internally displaced because of drought and climate-related disasters, including 137,000 due to conflict.

• And in March and April, more than 50,000 people were forced to flee their homes as operations against the Islamic insurgent group, Al Shabab, resumed in Lower Shabelle.

With continued political and food insecurity, and the second-longest coastline in Africa after Madagascar (3,333 kilometres) which is difficult to patrol, the U.N.-backed FGS said it is doing its utmost to end human trafficking.

“Somalia has a very long coastline and as I am speaking to you, we don’t have the capacity to control all of it, but our police maritime unit who have close cooperation with other forces in the country are always engaged in routine operations using speed boats, but to fully control such a long coastline needs much capacity than we currently have,” the head of the Department for the Fight Against Smuggling and Human Trafficking, Abdiwakil Abdullahi Mohamud, told IPS.

“Human trafficking is a big problem which must be tackled, but I can confirm that Somali parliament hasn’t yet a human trafficking law. We recognise the importance of a law, but right now there is nothing on the table, I hope we will get the law in place in the future, I cannot say when,” Abdi, told IPS.

However, the federal state of Puntland has a human trafficking act in place, which requires enforcement. While in the breakaway region of Somaliland, “a referral mechanisms for supporting victims of human trafficking was developed and adopted this year,” said Munyae.

In December, the FGS and IOM signed a cooperation agreement where “IOM proposes to work with the government in establishment of appropriate legal frameworks and referral mechanisms in collaboration with other UN and I/NGO partners,” Munyae told IPS.

There are no official figures of trafficking in Somalia.

Mohamud said his department developed a close cooperation with the Department of Immigration and has so far been able to end the trafficking of people through airports and sea ports.

However, he pointed out that it was not possible to control all land borders as they had limited resources available.

According to Mohamud, his department prevented thousands of young Somali men and women from being trafficked out of the country since it was established three years ago. But he is mindful that people previously saved from trafficking could once again become susceptible.

“We do not have the financial capacity to create jobs for them, but we teach them some skills and we then hand them over to their families. That is what we are able to do for them at the moment,” he said, adding that high unemployment meant young Somalis were vulnerable to human traffickers.

Munyae added that additional factors that resulted in susceptibility to human trafficking included, “poverty as a result of loss in livelihoods caused by displacements for whatever reason, family pressures, social factors such as child marriages and forced labour and customary practices and lack of appropriate legal frameworks for protecting the rights of mobile population”.

However, Muna Hassan Mohamed, the chairlady of Somali Youth Cluster, believes that many youth are risking their lives in the hands of human traffickers as they are promised dual nationality.

“Of course, the unemployment and insecurity are very big problems that we can’t deny, but the main factor that drives young Somalis to be exploited by human traffickers is what I can call [the passports].

“When I say passports, I mean European, American, Canadian or Australian passports, because if you are a citizen of any of these countries, then it is easier for you to be an MP, a minister or get a well-paid job in Somalia,” she told IPS, adding that most Somali parliament members, government ministers, general directors and other key staffers are all dual citizens.

“Almost every well-paid job in Somali government’s institutions has been taken by Somalis with foreign passports, while international NGO’s in the country do not have an equal opportunity policy when employing Somali nationals,” she said explaining that those Somalis with dual citizenship were paid more than locals.

Meanwhile, Omar Ahmed Tahriib-diid, who irregularly migrated to Europe in 2014, wants to spare others the hardships he faced.

Tahriib-diid, who now lives in the relatively peaceful Puntland State northeast of Somalia, said he decided to return to his native region.

“Every day I witnessed people dying of hunger or being tortured to death by the cruel human traffickers. We always hear in the news that migrants drowned at sea, but the underreported thing is that many more die even before reaching the sea,” Tahriib-diid told IPS of what he experienced when he left the country, travelling through Sudan and Libya.

“In Sudan they dealt with us well, but I can say that there was a widespread brutality in Libya which I can describe as a hell on earth,” he said.

Eventually, he made his way to Germany where he tried for an entire year and had been unable to get a job. Upon his return to Somalia, he landed a job as the regional coordinator for Sanaag region at the Ministry of Justice in Puntland State.

Now he remains engaged in awareness programmes and “succeeded to prevent many young people from risking their lives. Some of them are now running their own business or secured jobs through my awareness campaigns with the help from the government”.