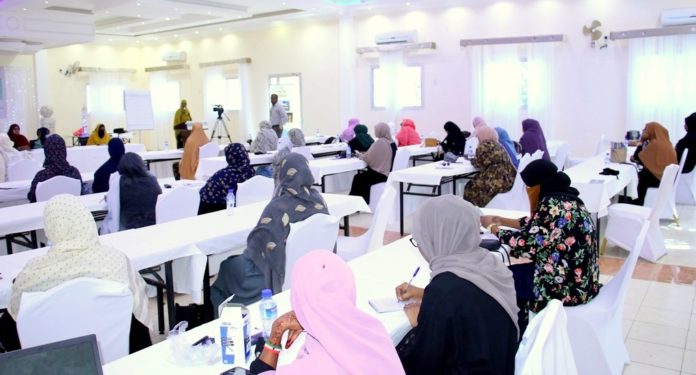 Nagaad Women’s Umbrella has opened a two-day meeting brought together women working in independent organizations, foreign organizations, the private sector, social affairs, and women lawyers. The aim was to involve women in their workplaces to achieve top positions in the country’s political participation and leadership.

The executive director of Nagaad, Ms. Nafisa Yusuf Mohamed speaking during the opening of the meeting on Tuesday (7/07/2020) urged women to aim high and compete for top places in the leadership of the country and national councils.

She added, “Although many of us for several years working on issues concerning women empowerment, but still at the local and community level all the way to the highest levels of government, women are often underrepresented in leadership positions, left without a voice in decision-making and ignored as an electorate as shown in the latest study. Thence the need for us to consult together and rely on one another since we are the majority of the population, so we must united our efforts.”

Ms. Nafisa Yusuf Mohamed went on to say that, we should not allow ourselves to be used whenever they need us, we are human beings, we are a nation and we make up the majority of the populace and that’s why we should stop begging for our rights and instead utilize our God-given powers.  All women are on an indescribable level in the Republic of Somaliland, so we need to take advantage of these two days to produce a statement that reaches the people of InshaAllah. I would like to use this opportunity to thank OXFAM and the NGO Consortium for their cooperation and we (Nagaad) have facilitated it.

Speaking on behalf of Somaliland NGO Consortium, Ms. Halilo Elmi Weheliye said that the outcome of the meeting would be to make it easier for women to become part of Somaliland’s leadership. It is an honor for us to meet here today for the opening of the two days forum and we expect the outcome will enable us to get our outcome. This means that women been the majority are underrepresented in all facets of the political process often due to social-cultural barriers, the absence of training and resources for women’s political organizing, standards of living, and precarious economic challenges. Nevertheless, we still have a lot to do, so I hope the meeting will be a great one, as Nagaad made it an independent and not with the political elite, as much as anyone could say. Therefore, we expect you to express your opinions and share your ideas to come out with something positive. ”

Ms. Shukri Hassan, head of the NGO Consortium women empowerment projects said that women are not fully represented in the major public and non-governmental organizations, because of various barriers that exist which prevent women from taking part in Somaliland’s governing bodies. She urged the participants of the two days meeting to come up with solutions meant to resolve the challenges and issue statements highlighting the position women in Somaliland.