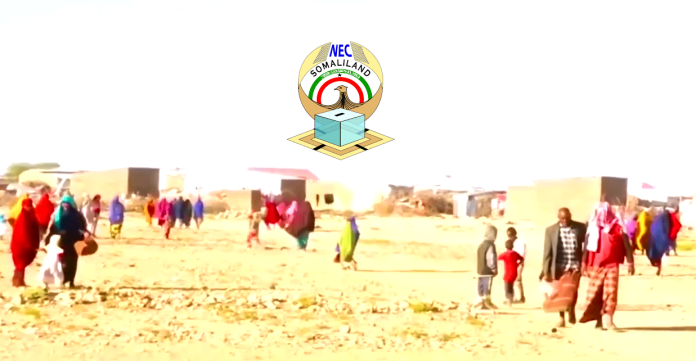 New Voter registration starts today in Sanaag and Sool regions in the final stages of the exercise already completed in the rest of the country.

This was released by chairman of the Somaliland National Election Commission Abdirashid Mohamud Ali (Riyo-raac), at the NEC offices in Erigavo while dispatching registration clerks to designated centers in Sanaag region.

“Apart from Gar-Adag and Eel Afweine Districts residents of all other in Sanaag region , including Badhan, Lasqoray, Dhahar  and Erigavo districts shall be served” said Commissioner Abdirashid Riyo-raac

The two districts excluded in the exercise were served in the third stage together with those of Toghdeer region between 27th  to 30th  December 2020.

The commissioner who urged targeted citizens to fully utilize the opportunity of having a say in choice of leaders also warned against double registration which is easily detectable since Somaliland uses biometric technology thus a crime.

This is the fourth and final stage of the voter registration exercises whose beneficiaries are those over 15 years of age and not registered before.

Meanwhile Buhoodle district in the east of the country registered for the first time thousands of voters  during the third stage of the exercise undertaken by NEC in other Districts in Toghdeer region including Aynaba District, Gar-Adag District and Eel Afweine District.

“Despite the fact that a majority of Buhoodle district are nomads thus on the go most of the time a very successful voter registration ensued with residents in their thousands taking advantage of the NEC exercise” said the region’s deputy governor Jama Deeq Ali during a telephone interview  with this writer.

While stressing on the predominant nomadic nature of  residents the regional administrator said that with ample time Buhoodle would have surpassed all other districts in Somaliland since at one time or other families return home after exhausting grazing in other areas.

With the excessive in its final stride NEC is discernibly on track of keeping to the timeframe announced during launch on the 7th November last year .

Between November 29th and January 13th, 2021, unregistered voters and those who have reached the voting age are guaranteed a voter’s card by the country’s Constitution.