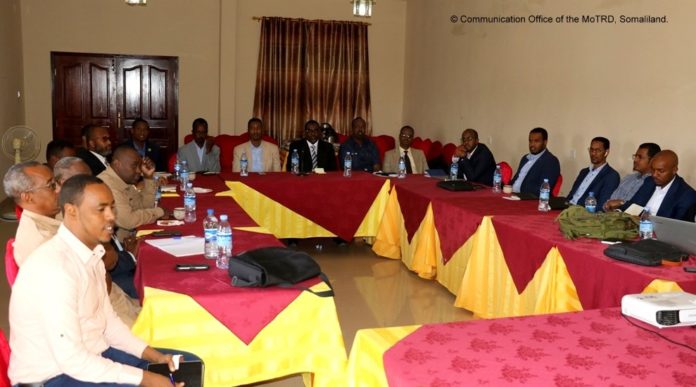 A meeting to sort and unveil the various documents filed by six companies competing for the technical evaluation of the construction of the road linking Borama to Lawyo-Caddo, was held at the Mansoor Hotel in Hargeisa today.
The meeting was attended by officials including the 1st Deputy Speaker of the Somaliland House of Representatives. Ahmed-Sheikh Sheikh Ali
Ayaanle, Minister of Transport and Development Somaliland Abdillahi Abokor Osman, mayor of Borama Md. Saleban Hassan Haddi, Chairman of
the Road Development Agency Ahmed Yusuf, other officials and officials from the six companies remaining on the contract.
Mr. Saleban Hassan Haddi, Mayor of Borama Speaking on the occasion, said that the construction of the highway linking the Borama  to Lawya-Caddo is crucial for Somaliland and the western parts of the country, he said. “It is something to be proud of and truly grateful
to Allah (SWT). With every successful company we will work with you on an open basis and have all of our God-given strengths and systems in
place.”
Former Minister of Planning and Development, Mr.  Ahmed Ibrahim Awale said, “The funding for this road project has been paid with great effort, and we have worked with the Minister of Transport and Road Development, which I know is a great deal of effort, and I would like to thank the government of Somaliland again. First, the President has
made it a priority for the production and development of roads. ”
The managing director of Somaliland Road Development Agency, Mr. Ahmed Yusuf speaking at the spoke on the various phases process of building the road from Borama to Lawyo-Caddo, and said, “We have been working together for some time to achieve success in the construction of this road linking the regions of Western Somaliland or most of East Africa and we are now in the process of choosing the final stage of selecting the suitable company out of the out the six companies and today were opening and sorting out the two files that are the financial and technical documents,
Mr. Jimale Dahir, the project manager for the Somaliland Road Development agency said, “Today, we shall opening the documents in your presence (Six Companies) which consists of the financial part and a technical part, so we expect you to file them separately.
Deputy Speaker of Somaliland House of Representatives Hon. Ahmed-Hussein Sheikh Ali Ayaanle, speaking at the meeting, said that the construction of the road linking Borama to Lawya-Caddo has been jointly implemented by the countries of Somaliland, Djibouti, Somalia and the African Development Bank, noting that Somaliland does not need Somalia’s consent for its development.We are grateful to the President of the Republic of Somaliland for his great contribution to this project. Somaliland and Somalia are in talks and we have not yet split up and have not been recognized, but that does not mean that any development projects that the African Development Bank or the World Bank were not entitled to get our share, even if it means on kilometre, Minister Abdillahi Abokor has been fortunate to be on the lookout for this initiative, ”said the 1st Vice-Speaker of the House of Representatives.

Minister of Transport and Road Development Somaliland Abdulahi Abokor Osman on his part thanked the African Development Bank and everyone who contributed to the implementation of the project.

“Firstly, I would like to thank God for bring us together, secondly I would like to express my gratitude to the African Development Bank and all those who contributed towards this project. We also want to thank everyone who has participated in the process to make it possible for us, as we came together today to open a technical evaluation competition, out of the 63 companies bidding only 6 companies wereshortlisted and in accordance with African Development Bank policy, so we shall chose one of the six companies”, said the Transport Minister.