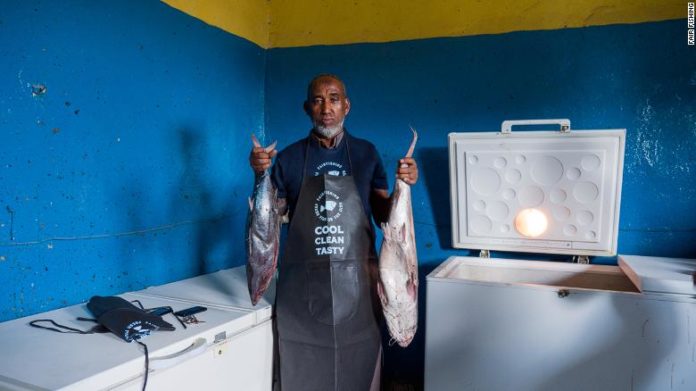 Not so long ago, the coast of Somalia was plagued by pirates.

At the peak of the problem, in 2011, there were 237 incidents of piracy off Somalia and the Gulf of Aden (the sea separating Somalia and Yemen), accounting for more than half of all such incidents worldwide. The pirates would often hold shipping crews hostage for ransom. Somali piracy cost an estimated $6.6 billion in 2011 in international naval activities, maritime security, insurance and other costs.
A couple of years earlier, a group of Danish businessmen and journalists decided they might be able to help. They founded an NGO called FairFishing to “turn Somali pirates into fishermen” and improve lives on the Horn of Africa by building up local businesses and creating jobs in sustainable fishing.
They weren’t alone in seeing the potential of Somalia’s fishing industry. The country has the longest coastline in Africa and the UN Food and Agriculture Organization (FAO) estimates it has the potential to sustainably catch 200,000 tons of fish per year, over six times more than the most recent catch estimates.

‘Why aren’t they fishermen?’

“The idea was created 10 years ago when there was a lot of piracy out of Africa’s Horn,” said Claus Bindslev, co-founder and chairman of FairFishing. “We were some guys in Denmark talking about why are they pirates? Why aren’t they fishermen?” 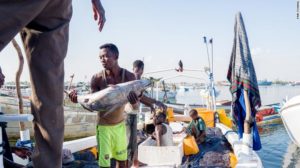 Somali fishermen landing fish in the harbour after a three day fishing trip at sea.
The outbreak of civil war in 1991, a tsunami in 2004 and severe droughts led to unemployment, criminal activity and food insecurity around the Horn of Africa, Bindslev explained.
“All the men who had been at sea went to the civil war,” said Bindslev. “Therefore, all the experience and all the know-how about catching fish in the local communities disappeared. So, we have a whole new generation and older people who don’t know anything about fish.”
The UN estimates exports of fishery products earned Somalia $15 million in 1989, but “the civil war arrested the steady growth of this trade.”
The collapse in the rule of law also opened up Somali waters to unregulated fishing from foreign vessels, which many Somali fishermen blamed for reducing their catch and driving them towards piracy.

FairFishing operates in two semi-autonomous regions of Somalia, Somaliland and Puntland. The first step it takes is to sell ice to fishermen, so that they can keep their fish fresh, says Bindslev.
“Then the price for a fish rises from around 50 cents to $2 from the station and between $4 and $6 from the market because it is cool and clean,” he said. 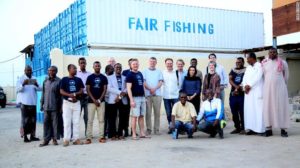 Some of the FairFishing staff, including local management, board members and fishers, gathered outside the fish station in Berbera, Somaliland.
The NGO says it now works with more than 25 fishing businesses, which collectively own more than 50 boats and 20 shops.
One business that buys ice from FairFishing is Berbera Tannery, which has 10 boats and more than 70 employees. Its daily catch ranges between 850 kilograms (1,874 pounds) and 1,300 kilograms (2,866 pounds) and the ice allows it to keep fish fresh long enough to sell in the neighboring country of Djibouti, says the company.
“FairFishing is very important,” said Mohammed Yusuf, Berbera Tannery’s managing director. “Fishing helps Somaliland to create jobs. All of our boats are registered in Somaliland and all our fishermen are from Somaliland.”
As well as ice, FairFishing provides equipment and runs educational programs for local chefs, fish vendors, fishermen and women householders.
A $3.3 million grant from the European Union in 2016 helped the NGO fund four coastal fishery stations, three fish markets and a boat workshop, the first of its kind in Somaliland.
A report by Nordic Consulting Group published in January 2019found the NGO helps support the livelihoods of around 2,000 to 3,000 people in the fishing industry. It says the average monthly income for boat owners has increased from $264 in 2012 to $1,288 in 2018. Crew members have seen their salaries increase more than 300% in the same period.

A decline in piracy

The number of pirate attacks off the Horn of Africa has fallen dramatically since 2011, with eight reported attacks in 2017 and just three in 2018. 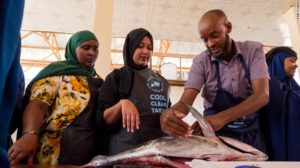 A FairFishing chef, Suleiman Farah, at a ‘Fresh Fish on the Dish’ training, where female householders, chefs and fish mongers learn how to handle and prepare fish.
The International Maritime Bureau says Somali pirates have been deterred by a combination of factors, including an increased presence of international navies, the use of private armed security teams, and “the stabilizing influence of Somalia’s central government.”
Last year, for the first time in two decades, offshore fishing licenses were issued by the Somali government for foreign and domestic vessels. Over $1 million was collected and the funds are expected to be reinvested into the domestic fishing sector, according to the World Bank.
Bindslev believes a growing fishing industry has also made piracy less attractive.
By 2021, FairFishing is hoping that turnover among Somali fishers, chefs and street kitchen owners will have grown to $10 million, says Bindslev. “My vision is to create peace and business with fish,” he said. “Then show the world we can do good things in very fragile places.”
CNN