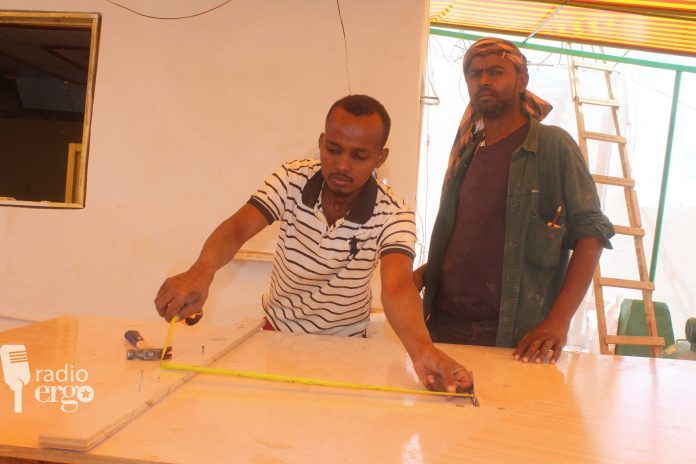 Abdikadir Jamal Ali relished the day eight months ago when he was finally able to move his family out of their miserable displacement camp to live in a decent rented house in the Somaliland capital, Hargeisa.

Ali, 26, and his four siblings had been living in the IDP camp for six-year, surviving on hand-outs from aid agencies, since they left their village inOweyne, Togdher region, after losing all their livestock to the drought.

A new initiative aimed at creating jobs for young displaced people in Hargeisa is now changing his life.

Ali, the sole breadwinner of his family,is working as a video editor in a studio in the town after being trained by a local organization, Shaqadoon.

“I get a salary of $420 a month, my life has drastically changed. I rented a three bedroom house in Galjanoneighborhood and I pay the school fees for three of my siblings costing $90 dollars,” Ali told Radio Ergo.

Ali, a primary school drop-out, was among 232 displaced youth who joined the training scheme. He completed a two months training period with Shaqadoonduring which time he earned an allowance of $100 a month. On completion, he was supported to get a job at a video production studio.

Shaqadoon has trained 900 youth to get different jobs after various technical and vocational skills training including masonry, office management and IT course in Boroma, Hargeisa, Burao, and Berbera.

Abdikani Hirsi, head of projects, says Shaqadoonaims to help reduce unemployment among the youth in Somaliland.

“The rate of unemployment is at a critical point. Despite the availability of job opportunities in the country, our people do not have the skills, leaving it to many foreigners who currently work in the country,” Abdikani explained.  “Unemployment is close to 76 per cent but we think this project could help youth and open paths for more employment.”

MuhyadiinAbdirahmanYasin, a laboratory technician, received training by Shaqadoon in 2018 and works in the laboratory at Dalsan hospital.

Yasin is pleased with his $370 that enables him to pays the school fees for his six siblings as well as the family’s food needs.