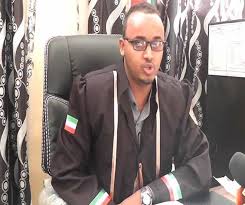 Ahmed Dalmar has been the chairman of the court until yesterday and was seen a strong judge who usually do not favour cases biased to the pro-government clients brought to his court.

“I declare that I have decided today to resign from my position as the new judge of the Appeals Court of Marodijeh which I have been posted on yesterday only,” said judge Dalmar reading his resignation letter to the media.

One of the major court decision’s by judge Ahmed Dalmar was last Saturday when he rebelled a police application seeking long-term detention for a critic journalist Abdimalik Muse Oldon who was arrested on April 17 but the state and the police sought more time in jail to allow issuing charges against him.

In that verdict, which was later overturned by the Supreme Court of Somaliland, judge Dalmar ordered the police to return the journalist to his hometown of Burao where he has been first arrested.

According to sources within the government, the top police officials complained to Somaliland president Muse Bihi Abdi over the judges and officials whom they accused of being aiding dissidents.

In a decree issued on Saturday, president Muse reshuffled in key positions in the Marodijeh coyrt and Hargeisa local government officials.

Judge Ahmed Dalmar has been transferred to the Appeals Court.

“I shall not also take over the new position I was appointed to,” judge Dalmar added.

Among other officials affected is the Mayor of Hargeisa, Abdirashid Hersi (better known as Beergeel). Mr Beergeel has been appointed as a member of the regional Marodijeh Court.