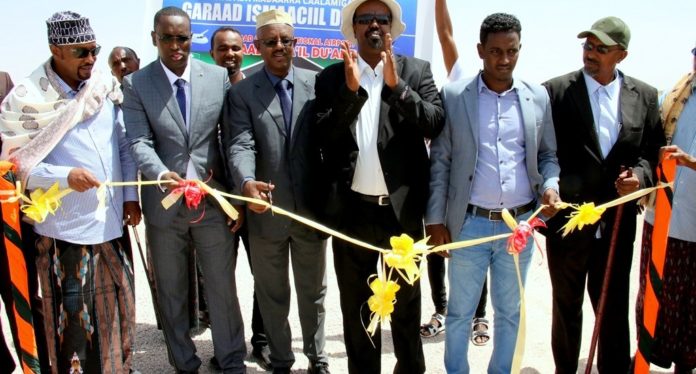 Las Anod-Officials of the Ministry of Transport and Road Development together with the Sool Regional Administration, Las Anod District, Somaliland Road Development Agency and TIS-PLUS were present during the ceremony held for the opening of a 5km highway that links Garaad Ismail airport and Las Anod town.

Garaad Jama Garaad Ismail Duale, local elders and other officials who spoke at the event said that the construction of this road is vital for the development and mobility of the Sool region, and paid tribute to everyone who contributed towards the construction and financing of the new tarmac road connecting the airport with Las Anod town.

The mayor of Las Anod said that the road will contribute to development and travel in the Sool region as a whole and throughout eastern Somaliland. He further highlighted that the Las Anod council had played a key role in the planning and construction of the new road, in collaboration with the Ministry of Transport, Somaliland Road Development Agency and TISS +.

Ahmed Yusuf, Managing Director of Somaliland Road Development Agency speaking during the ceremony said,  “I would like to use this opportunity to thank USAID and TISS +, and the Mayor of Las Anod for organizing the ceremony for the opening of the new 5KM tarmac road linking the airport and Las Anod town. We at RDA worked hand in hand with the Las Anod city council in the planning and construction stages of this new road.

Mr. Abdiqani Mohamud Jiidhe, the governor of Sool region said that the completion of the road clearly shows the ongoing progress in terms of development and security that has taken place in Sool region, and at the same time thanked all those who helped build and complete the main road.

Hon Sahal Mohamed Jama, the deputy Minister of Transport and Road Development said that the road that connects Las Anod and Garaad Ismail Airport is an important one, noting that the ministry is building other roads in Sool region and Las Anod district.

“This new road is one of many roads that we are being constructed in the Las Anod district such as the Adhi-Cadeeye  and Maraga roads and we shall start in the course of Month (March) the construction of a new 30 km Xaraga road, and next month (April) with the support the  Somaliland Development Fund (SDF) shall start the rehabilitation of all major roads in Las Anod, “said the Deputy Minister of Transport and Road Development. 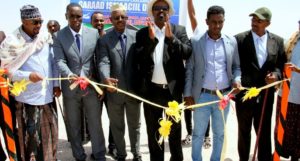 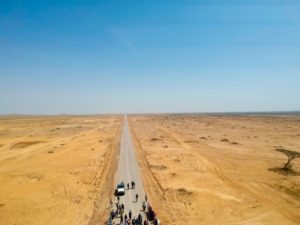