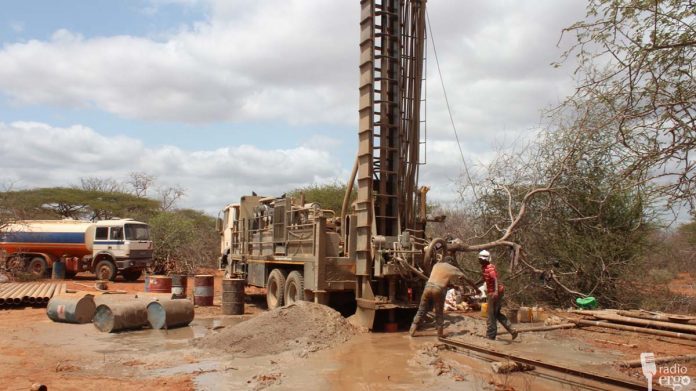 Fetching water every day used to be both time consuming and worrisome for Somali mother Sahra Ali Obsiye, living in Somaliland’s most westerly Awdal region, where drought has bitten hard in recent years.

She used to wake up early in the morning to walk to a nearby small water catchment or dam, which was the only source of water for people in Dilla village.

The village had no boreholes and the dam always turned to dust in the dry season, when expensive water tankers would truck in water from Gebilay and Borama towns to sell at prices people could ill afford. But Sahra’s main worry was always for the safety of her children.

“The dam is only a kilometre away but it used to take an hour for me to fetch water because the place was muddy and slippery around the edges. My main worry was the children, as I sometimes sent them to fetch water,” she told Radio Ergo.

Sahra and 6,000 other families in this part of Awdal have welcomed the drilling of two wells by a local NGO, Horn of Africa Voluntary Youth Committee (Havoyoco), in cooperation with Somaliland’s water ministry.

“Our main challenge was always getting enough water. We used to share the water with the wildlife,” Sahra said. “Nobody knew who drank from this water at the dam when we left or during the night because it had no cover. People even used to swim in it.”

The wells were opened to the public in September. The community has welcomed the source of clean, freshwater. The water in the dam was often discoloured and smelled bad, but despite the health risks people had no choice but to drink it.

Another villager, Halima Abdullahi Nur, used to carry her clothes and utensils to the dam to wash them there, as her home was too far away to go back and forth.

“We could not fetch enough water for all our needs for cooking, drinking, washing and bathing. So for drinking and cooking, we used to carry water home in jerry cans, but we used to wash our clothes and bathe there at the dam,” said Halima, a mother of six.

The chief of Dilla village, Adan Osman Said, told Radio Ergo that it had taken a long time for the requests for wells to be drilled in the village to be answered.

“Our main problem was always water. Now this is resolved and everybody is getting water,” the chief said.