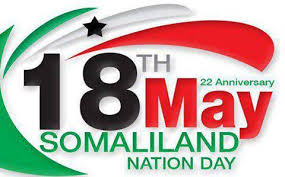 The legitimacy of May 18 has been questioned by the members of parliament as well as dignitary figures. What is wrong with May 18? Why does senator Dhakool demonise May 18? If I tried to answer these questions my answer would be simple. First of all, what is wrong with May 18? Nothing. May 18, 1991 was the day that Somaliland elders, tribal leaders and politicians had declared withdrawal from the unity of Somalia. It was not only one particular group, ethic or tribe. The decision was unanimous.
As far as Somalia claiming the sovereignty over Somaliland, the government as well as the Somaliland citizen have a right to celebrate on May 18. The Somaliland citizens have a right to demonstrate and to express themselves by showing the legitimacy of the its own sovereignty as independent nation or country. May 18 is not and was not the Somali National Movement day (SNM). As everyone of us know, the Somali National Movement was organized in London, England, on April 6, 1981. To label Somali National Movement on May 18 is misleading and deceptive.
The second question is why senator was Dhakool arrested? The senator has right to express his opinion openly without fear. However, the senate did not expressed his opinion but on the contrary disseminated the hate propaganda or speech. “Hate speech is a verbal or written communication expressing a generalized negative opinion about a particular demographic, sometimes attacking a member of group. Hate speech often targets particular races, nationalities, ethic groups or distinct group may be targeted.”
The senate made an abusive comment. He targeted one ethnic group or particular race and said, “They committed a crime against humanity because they were evacuated or displace the Borama district inhabitant, the Erigavo district inhabitant and Bohotle district inhabitant.” That is a big accusation and I have never heard that accusation come from a member of the Somaliland parliament. He also mentioned that May 18 is only a day that one of the particular groups have express their own desire, which is not true. As I mentioned before, May 18 has nothing to do with SNM affiliate tribes or any particular tribe. On the other hand, Senator Dhakool has a privilege and parliament immunity and the government of Somaliland can not take any legal action against him.
As I mentioned above the decision was not reached by one tribe; it was a unanimous decision. Every Somalilander has a full right to organize, commemorate and honour on May 18 in every year. On the other hand, May 18 is not unchangeable. As a nation, we have ability to reach a concession, compromise and tolerance. Therefore, the House of Representative as well as the House of Elders and other stakeholders have a capability to sit together and again reach undisputed decision to change 18 May.
Somaliland people deserved to have harmony, peace and tranquility. Not to create hostility, hate and detestation. We all recognize that further conflict would be unnecessary, ineffective or otherwise undesirable. We have always looked at the big picture and we tried to overcome the quarrels between us in terms of any conflict.