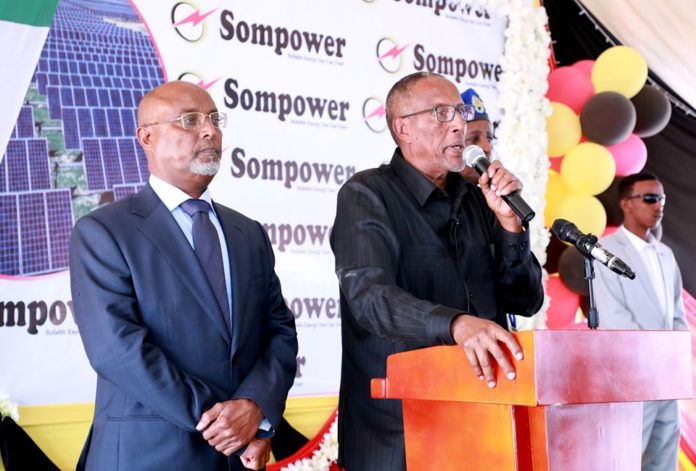 It is worth noting that Hargeisa was totally destroyed by the Late Siyad Barre dictatorship in 1988. But the city, as well as the entire country, has since been reconstructed in a slow but steady process of nation rebuilding and rehabilitation.  The Company that provides electricity to Hargeisa is called SOMPOWER; a consortium formed following the merger of 35 small providers that emerged after the Independence war in 1991.

The head of SOMPOWER told reporters in Hargeisa yesterday, that the new power plant will cover about 80% of the city’s power requirements. But this is mainly the needs of the residential segment of the subscriber population since the industrial sector normally generates its own power.

Somaliland pursues strict private ownership and the free-market economy as enshrined in its Constitution. As a result, major economic segments like banking, power and telecommunication are in the hands of few private institutions. The Government role is restricted to the business of regulation and at-Arms-Length control.

Consequently, the economy is growth a satisfactory pace. However, the entire national wealth is getting concentrated in the hands of a few private tycoons and is this could be a recipe for perpetual deepening of the income gap and future unrest.

Therefore, Somaliland needs to adopt a strategy aimed at retaining and nurturing the Free Market Economic Model, while at the same time safeguarding the interests of the low-income families by supporting Competition and Equal Opportunities.

The gateway to any economic liberalization plan should be the introduction of Somaliland Joint-Stock Company Law. First, vital industries like Banking, Telecom, the Cement industries should be converted into publicly traded companies. The existing owners should sell at least 30% of their stocks to the public. The government should develop an Advanced and Well-regulated Stock Market – by international Standards.  This will facilitate Transparency, Good Governance, and more Equitable Wealth Distribution.