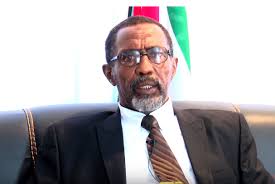 The Speakers of the House of Reps, Bashe Mohamed Farah and the information minister, Sulieman Ali Koore who hail from the same province have flanked Qambi during his press conference.

The minister has publicly apologized Hass Petroluem of accusing the company of funding a rebellion based in Buhodle district in Somaliland’s eastern region.

He officially said that his apology is linked with the fact that he could not provide any clear evidence that Hass Petroleum is financing the rebel group but he reiterated that there were individuals who are funding the group.

The minister called on Hass Petroleum board of directors to dismiss unidentified staff from company staffer who he said was in Mogadishu and accused of giving money to the militia group in Buhodle.

It is not the first time that the minister of public works and housing has retracted allegations that he leveled against the commercial company 24 hours after he made the scathing allegations.

The minister has further declined to comment the reasons to make such accusations.