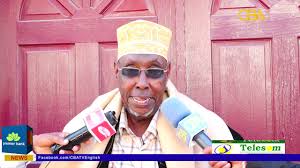 HARGEISA–Abdirahman Osman, a member of the house of the standing committee, said the rumors of the resignation of the speaker were started by some members of the house who alleged of harboring individual ambitions.

However, the elder has declined to name names of the individuals he alleged to have started the speculations.

The elder categorically denied that the speaker is resigning for health or other reasons.

He maintained that the speaker will have shared his plans with the standing committee if he had such intentions.

Abdirahman Mohamed Osman said the speaker was at his office discharging his duties.

“Before he tendered his resignation, the speaker is our chairman. He would have informed us in the first place. He is at his office and we have just left him. He did not disclose anything to us. These are baseless lies spread by some of our colleagues. We know who they are.” Abdirahman said

The elder was responding to the rumored resignation of the house speaker so that the chairman after the controversial electoral commission could take his post.

This is alleged to be the government bargain with Abdirashid Riyo-raac for his resignation for the electoral body which is the bone of contention of the protracted electoral impasse.