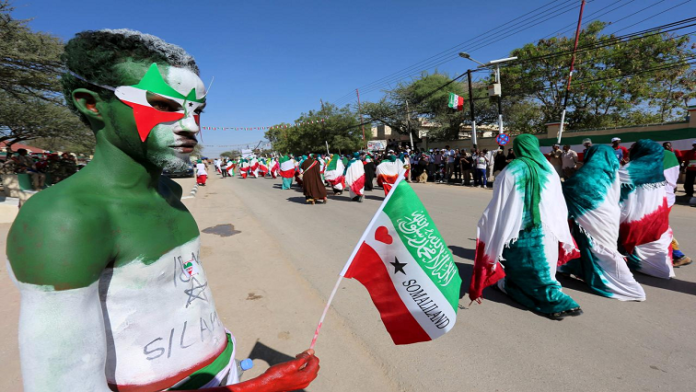 On Saturday, Somaliland will mark 28 years of self-declared independence from Somalia.

Somaliland is lobbying neighbouring East African states to push for its recognition by the international community. This week, ahead of its 28th independence anniversary celebrations, the administration is hosting several delegations to demonstrate its nationhood.

On Saturday, Somaliland will mark 28 years of self-declared independence from Somalia. A big celebration is planned, but like previous celebrations it will be just another day for the international community, which has refused to recognize Somaliland. But Somaliland is not giving up.

Using quiet diplomacy to lobby neighbours to push for its recognition, on Thursday, a delegation from the Ugandan parliament listened to Somaliland Members of Parliament make their case for international recognition.

Somaliland MP, Abdurahman Atan, says that they have done their part of the work.

“It’s very painful really because we have done our own part of the work; we have made peace, we have made institutions that work and the international community is looking the other way.”

This time, they seemed to have won the hearts of the Ugandans. Uganda MP, Violet Akurut, says that they want to ensure the Ugandan President recognises Somaliland.

“The message we are taking back is first to ensure that our president, Yoweri Museveni, recognises Somaliland. Once he does that, then our country would have recognise Somaliland and since we are members of the African Union, it will be easy at that level to lobby for recognition of Somaliland.”

Somaliland was once a British colony united with Italian Somalia in 1960. On 18 May 1991, Somaliland declared its independence from Somalia following a civil war that led to removal of dictator Siad Barre.

They are talking about Pandora’s Box

Somaliland policy advisor, Mohammed Mohamoud, says that the unity between Somaliland and Somali has failed.

“In the first place in 1960, Somaliland united with Somalia and then that unity has failed and Somaliland people decided to withdraw that unity from Somalia.”

Somaliland now issues its own passport, has its own currency and a flag. It has managed to remain peaceful despite an on-going civil war in Somalia; Somaliland has held regular elections since 2003.

The African Union and the United Nations have, however, refused to recognize the breakaway nation, tying its fate to Somalia’s final say.

Atan says the unions fear that, by granting Somaliland independence, other African regions will also seek the same.

“They are talking about Pandora’s Box; if for example they recognise Somaliland, they think other African regions will also ask for independence. But that’s not true; Somaliland has been an independent country before they joined Somalia.”

Although it has diplomatic representation in several countries, lack of international recognition means it cannot access aid or loans from multilateral institutions like the International Monetary Fund (IMF) and the World Bank.