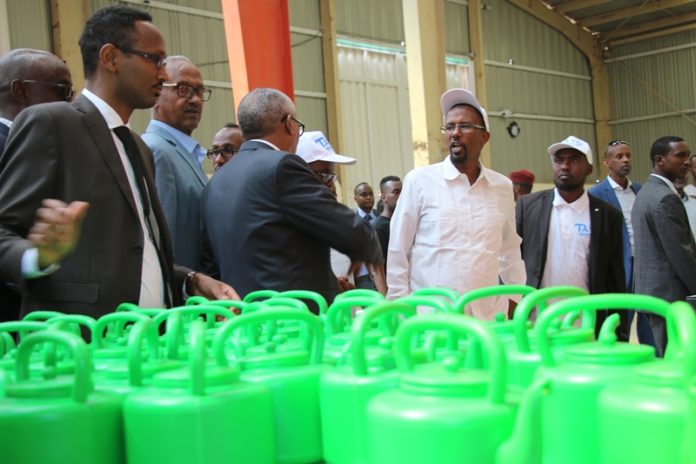 The VP H.E. Abdirahman Abdillahi Ismael Seyli’i has urged entrepreneurs who run corporations that are public liabilities entity to focus on globally standardized management such that they may be sustained, expanded and prosper.

While at a function ceremony for the launching of Tayo Plastics Factory, the VP lamented that there were several production companies in the country that have since become obsolete due to mal-administration and associated incompetence.

The VP noted that when businesses are incorporated as public liability entities they demanded diligent management that was in line with the regulated rules thereof.

He pointed out that lack of honoring the regulations were fertile grounds that fermented ill innuendoes hence brought about prominent lack of trust amongst the major shareholders.

He advised entrepreneurs who run such companies to be more transparent, open and if necessary float there shares.

The Tayo Plastics Factory is evidently the pioneer of first such productive complex that specializes in the manufacturing of plastic appliances for home and general use such as kettles, pails, jugs, suckle containers etc.

The VP was accompanied to the function by the minister of Trade, Industry and Tourism and that of Transport and Road Development the Honourables Mohammed H. Sa’ad and Abdillahi A. Osman, the deputy finance Minister Hon. Abdiqadir Mohamud Sheikh and Investment DG Deeqa Abdi Yusuf.

The Trade Minister hailed the franchise as a milestone hence coaxed local investors to emulate them while at the same time extended the same praises to all local productive industries.

Mr. Ahmed M. Ali who spoke on behalf of the company disclosed that the country will no longer need the importation of petty plastic appliances for home use any more.

He noted that the plastics will be able to manufacture all types of plastic appliances that may be need in the country for general and home use, which is as far as kettles, pails jugs, jericans etc made of plastic.