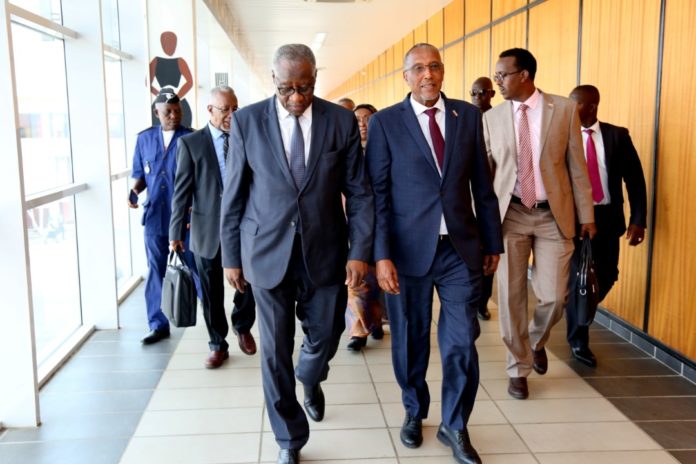 Somaliland has hit back at Somalia for what it termed at the latter’s bullying of her international friends.

This comes in the wake of Somalia’s decision to cut ties with Guinea who are currently hosting the President of Somaliland Musa Bihi on official visit following an invitation by Guinea’s President Alpha Conde.

The Somalia government says it see the invitation of the Somaliland leader to Guinea as an “egregious violation the Sovereignty, unity and territorial integrity of Somalia”.

This coming just a week after Somalia hit at Kenya after the Ministry of Foreign Affairs in Nairobi published a tweet that seemingly recognized the self-proclaimed independent Republic of Somaliland.

Subsequently, Somalia’s foreign ministry summoned Kenya’s ambassador and presented him a note of protest about the “offensive tweet”.

“We consider this tweet an affront to Somalia’s sovereignty, unity and territorial integrity as well as harmful to the relationship between Somalia and Kenya,” the foreign ministry said in a statement.

“The ongoing complaint and bullying of Guinea government is a preemptive action to scare other countries such as Kenya from engaging Somaliland. The International community should ignore the complaints and continue to engage Somaliland which is a fully fledged democracy with its president and legislature elected by popular vote. The current and previous presidents of Somaliland have engaged and continue to engage with other foreign countries at the highest level,” stated the statement.

Somalia termed the visit to Guinea by Somaliland president with its foreign minister Ahmed Isse Awad sending warnings to other countries that were similarly “violating Somalia’s sovereignty.”

Somaliland government stated: “The Government of the Republic of Somaliland is deeply alarmed and disheartened by the Government of Somalia’s widening campaign of aggression towards a growing list of African nations. At a moment when Africa’s leaders are converging upon Niamey to find common solutions to continental peace and security issues, and to promote further integration, the Somalia administration has instead chosen to ratchet up its policy of threat-based and divisive diplomacy, this time aiming its empty but provocative rhetoric against the proud nation and people of the Republic of Guinea, solely for engaging in routine bilateral relations with the counterpart state of the Republic of Somaliland,” added the statement.

Somaliland said the move by Somalia revealed accurately just how desperate and weak their position was with regard to Somaliland whose links with other African countries is growing by the day.

“The statement issued by the Somali Foreign Ministry said more about the country’s leadership’s paranoia and obsession with doing everything to undermine and sabotage Somaliland’s growing diplomatic and trading links with other African countries and international investors.”

Somaliland is home to over 10,000 Kenyans with Ethiopians, Yemenis, Indians and Turkish citizens too living and working in the country.

Somaliland is seemingly attracting more investors, something that has infuriated the Somali government in Mogadishu.

Somaliland has considerable yet untapped mineral wealth as well as oil and gas potential, and it’s located in a vitally strategic point at the mouth of the Red Sea where 68% of western trade with Asia passes along its shores.

The country has been de facto independent for nearly 30 years since breaking away from Somalia, and enjoys strong diplomatic links with regional powers such as Ethiopia, Kenya and Djibouti – as well as strong support from UK, EU and Arab powers.

Somaliland declared its independence from Somalia in 1991 and has maintained a measure of peace and stability. But the territory, which is in northern Somalia, is not recognized by any foreign government. Somalia insists that Somaliland is not independent.