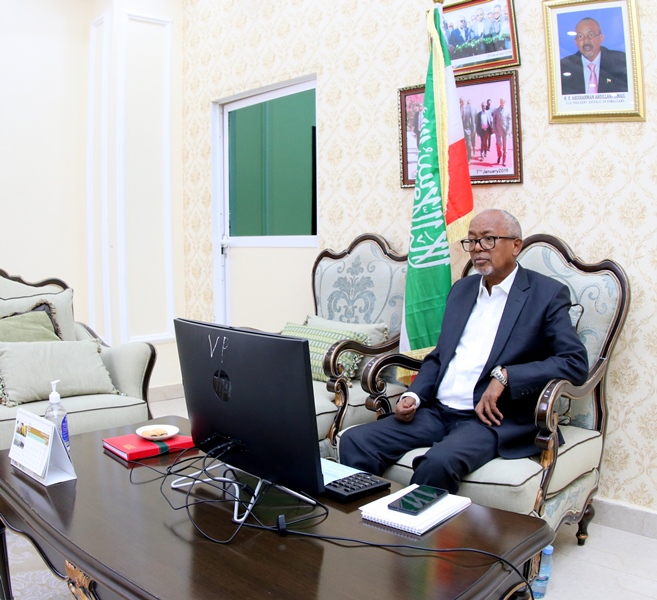 The cabinet discussed the situation in troubled Fadhi Gaab and El Afwein areas and promised that the recent hostilities that flared in the region will soon be resolved.

The Vice President, Abdirahman Sayli’i, who chairs the National Committee against Covid-19 has said that the Commitee formulated a social protective plan for the delivery of free food to at least 40,000  households in the country.

The free food delivery is meant to mitigate the impact of a lockdown implemented on March 17 by the government, aimed at limiting the spread of the Covid-19 pandemic.

Somaliland has barred that agencies not officially registered cannot implement projects in the country.

National Planning ministry has been tasked to oversee a consensus on the ongoing projects in Somaliland to ensure that they are in compliance with the laws of the land.

All ministries and government agencies are ordered to make sure that the projects are in line with the regulations in Somaliland.

Somaliland cabinet has reached a unanimous decision that Somaliland government will attend international conferences but on condition that it must not compromise the statehood and independence of Somaliland.

The cabinet has made clear to the African Union, IGAD and other bodies that are keen on the peace and stability in the Horn of Africa that a letter issued from Mogadishu which entails the process of selecting MP’s repressenting Somaliland at the Federal Parliament is a true act of aggression.

The cabinet has ascertained that individuals hailing from Somaliland who are currently in Mogadishu do not represent the public and the government of Somaliland but had traveled to Somalia in search of public office and livelihoods.

Somaliland public gave the mandate to lead the state to the parliament and the president.