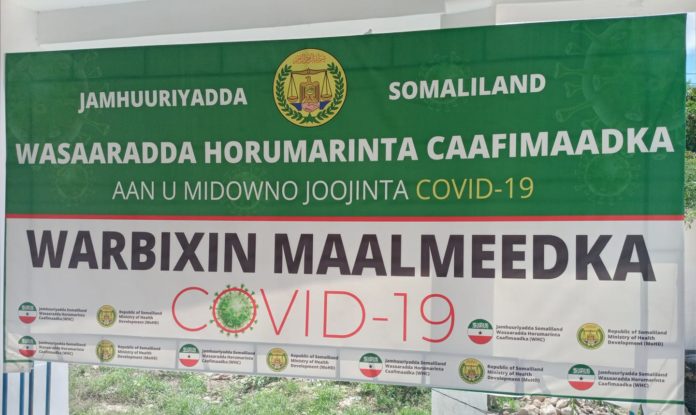 The Ministry of Health of the republic of Somaliland has repudiated claims that imprisoned journalist Abdimalik Muse Oldon has contracted Covid-19 at a prison facility in the capital Hargeisa. The Ministry’s clarification comes a day after Wadani party expressed deep concerns over the deteriorating health condition of the detained journalist, Oldon. The family of the journalist who is in jail a year now, has said he has fallen ill and has the signs of Covid-19.

However, the Director General of the health ministry, Dr. Mohamed Hergeye denounced the accusations leveled against the government, it has sidelining the health of the journalist, Abdimalik. Director Hergeye has said Abdimalik’s Covid-19 test and the results showed negative. The government has also promised to conduct further tests to validate the results of the first examination. The family of the imprisoned journalist Abdimalik Muse Oldon had announce that he is suffering from terrible cough and difficulties with breathing. The Int’l Human Rights advocate, Amnesty Int’l, had previously pointed out coronavirus risk to which Abdimalik Muse Oldon is exposed in prison. In a press statement on the first anniversary of his detention, Amnesty Int’l called on Somaliland government to release Oldon considering the high risk of coronavirus infection in prison. Amnesty Int’l further called on SL government to immediately and without condition release the journalist who has been languishing in jail Amnesty said Oldon should be part of 574 inmates that were pardoned by President Bihi to contain the spread of Covid-19 in the country. Abdimalik is a fierce critic of President Musa Bihi’s administration was arrested on April 17th last year. He was charged with anti state propaganda and defamation against private school in Marodi Jeh region. He was sentenced 3 and half years in jail.