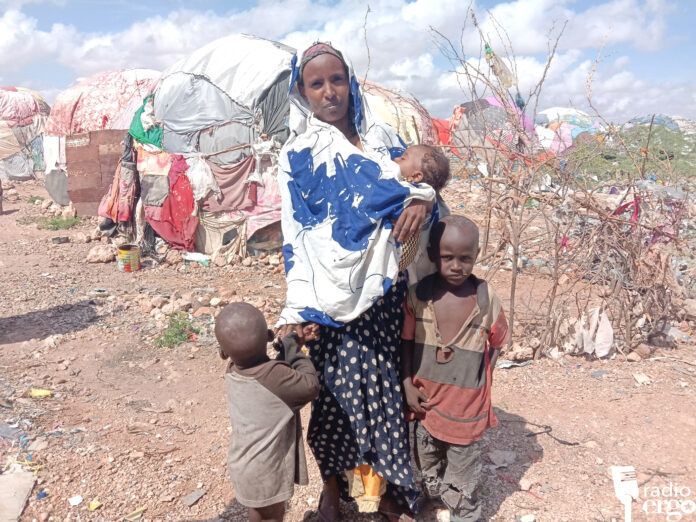 In this week’s report from Somalia’s IDP camps, Radio Ergo visits Nasa-Hablood camp near Hargeisa, where destitute former pastoralist families face a lost past, an empty future, and constant threats of eviction from landowners.

Fear and anxiety haunt the displaced pastoralist families in Nasa-Hablood camp, on the outskirts of the Somaliland capital Hargeisa, after losing their past livelihoods and facing eviction any day.

“The only thing we can think about is where we will go to next and where our children will live,” said Halimo Jama Awale, who, is sleeping rough in the open with her six children, worrying when the landowners will come again with threats.

“They visit us all the time. I can’t defend this land we have lived on, I don’t know what to do,” she told Radio Ergo.

Halimo has piled up the sticks and cloths that used to form the structure of her hut. She took the family shelter down when she received the first eviction notice last month.  The second notice came when she woke one morning to find construction materials dumped beside her hut.

Around 35 families have already been forced to leave one section of the camp, which isbeing eyed for development, as the city of Hargeisa expands towards the outskirts. Some of them moved onto another piece of privately owned land five kilometres away, whilst others went further away to a piece of open scrubland.

Halimo has lived in Nasa-Hablood for six years. The family moved from Dabagoroyale, near the Ethiopian border, after all their livestock died in the drought.

“If I get a piece of land I would focus on earning a living and my children would live a better life.  I cannot afford to rent a house in town,” she said.

Unfortunately, Halimo’s source of income has been disrupted. The landowners barred the women who were digging stones to grind into the gravel from damaging the land.  They have earned nothing for the last three months. They are depending on food handouts, help from their relatives, or on their husbands if they have one.

The owners have blocked attempts by the locals to construct latrines, so camp dwellers have to use the surroundings as an open toilet.

Amina Ibrahim Adan, 50, is also struggling to raise her five children alone. She has lived in Nasa-Hablood for 10 years. She and 12 other families in her part of the camp have received four eviction notices since April.

She took down her hut after the first warning but put it has put it back up again for the time being as the men have not yet returned to threaten them.

“We wanted to settle in this area so that we could be seen by the government and the people and they could help us,” Amina told Radio Ergo.

“Circumstances forced us to live in the camp. When we lost our livestock and migrated to the city we couldn’t afford the house rent.”

Amina has been diagnosed with tuberculosis and is often sick. She yearns for a safe place to settle and construct a small house. The family lost all their 250 goats back in 2009.

Nasa-Hablood currently hosts 532 destitute former pastoralist families. They are living without access to schools or a health centre. The women give birth in their huts. They have to buy water.