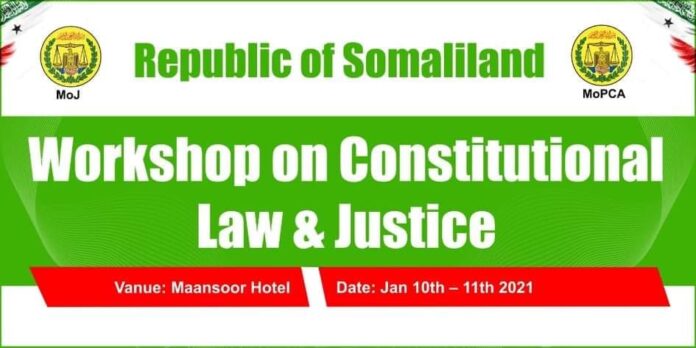 SL ministry of National Assemblies & Constitutional affairs for coordination together with the ministry of justice organized two-day workshop on constitutional law & justice for various section of the community.

The event was attended by gov’t officials including the minister of constitutional affairs, Mohmed Haji Adam.

At the opening ceremony of the event, SL constitutional affairs minister, Mohmed Haji Adam welcomed the attendees and shared them with the importance of this program as well as encouraged them to benefit from the program.

Mohmed Haji said: “Our main purpose is that we invited these great intellectuals including Dr. Amal to take advantage of them to other knowledge of the constitution and justice in our nation.”

The ministry of national assemblies and constitutional affairs said that SL has one of the best constitutions on earth but the public does not apply it well.

He said as government institutions will develop their knowledge.

Justice Ministry DG, Abdirahman said: ” The ministry of justice and the ministry of parliamentary affairs and constitution have organized this workshop in a bid to promote constitutional affairs in SL. The creation of SL constitution dates back to SL’s inception back in 1991 and creating a constitution that was in line with the int’l standards that protects basic rights was a process. It was a debate Somalilanders  came together in general grand conferences in Hargeisa as well as Borama. Somalilanders have succeeded with great struggle to vote for the constitution in 2001. Now today we have organized this workshop so that diverse section of the participants can at least listen to Dr. Amal and learn from other constitutions that have been created in other countries and to focus on how best we can first understand the parts of the constitution and what our young academicians, law school students in our universities can at least learn the inter play between the constitution and the provision of justice.”

On the other hand, Dr. Amal Ali who is an expert of this field explained in depth the importance of the project.

For the past year the Somaliland government has been striving to increase its efforts to improve public awareness on constitutional law and justice.