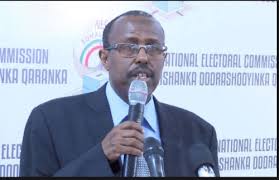 HARGEISA–Somaliland’s Chief election commissioner has ruled out his resignation despite SONSAF calling his removal from the post on Tuesday. The Chief electoral commissioner and SONSAF traded accusation through the media. Somaliland non state actors forum (SONSAF) chairperson has alleged the current election chief as an impediment to free and fair parliament and local council elections to transpire in the nation as slated on 12th of December, 2019. Mr. Abdikadir Iman Warsame has termed SONSAF’s statement as not in line with the rules and regulations of the state. The election chief commissioner held a press conference yesterday in which he said that the statement from the civil society chairperson as absurd and surprising. Mr. Iman has counter accused Sonsaf’s chairman that he has gone beyond the scope of the elections in Somaliland.

The national election commission chairperson has asserted that everything is prepared in regard to the upcoming parliament polls which is slated to take place in the country in December this year. Sonsaf chairperson has committed a grave error against the nation in which he ordered the Head of State to fire NEC members said the chief . Parliament and local council polls in Somaliland are up in the air as there is a row among the stakeholders be it the political parties, NEC and the government.