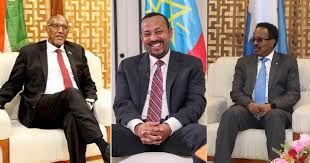 Somalia’s President Mohamed Abdilahi Farmajo is due to pay an official visit to Djibouti next week. President Farmajo is supposed to meet up with Djibouti counterpart, Ismail Omar Guelleh on next Tuesday. The incumbent Ethiopian PM Abiy Ahmed is also due to travel to Djibouti. The three leaders of Djibouti, Ethiopia and Somalia are expected to hold talks on the tripartite meeting in Djibouti. Discussions will concentrate on the Horn of Africa and regional integration that the Ethiopian PM Abiy Ahmed has spearheaded. The leaders of Eritrea, Ethiopia and Somalia met in Asmara and initiated discussions on the regional integration. Djibouti did not attend Asmara meeting due to border row with Eritrea as the two countries locked horns over border spat. Djibouti was irked once Somalia’s leader Farmajo attended the tripartite meeting and perceived it that Somalia has stabbed Djibouti in the back. Somaliland President Musa Bihi Abdi is also expected to visit Djibouti and will meet up with Somalian counterpart Farmajo as planned. Djibouti president flanked by Ethiopian PM are spearheading efforts to bring the leaders of Somalia and Somaliland to their second face to face meeting sides the Addis Ababa impromptu get together. President Bihi and Farmajo met in the office of Ethiopian PM earlier this year. The two leaders are expected to reach an agreement to ease the stranded relations between Somalia and Somaliland. As per the would be agreement, The Somalia Federal Govt will release the projects and funds under suspension which the international community has earmarked for Somaliland. There is covert talks that Somaliland and Somalia are involved as disclosed by UN Special Envoy to Somalia, James Swan during a briefing to the Security Council on Somalia’s situation. The diplomatic efforts spearheaded by Ethiopian PM Abiy Ahmed is backed up by the US government.