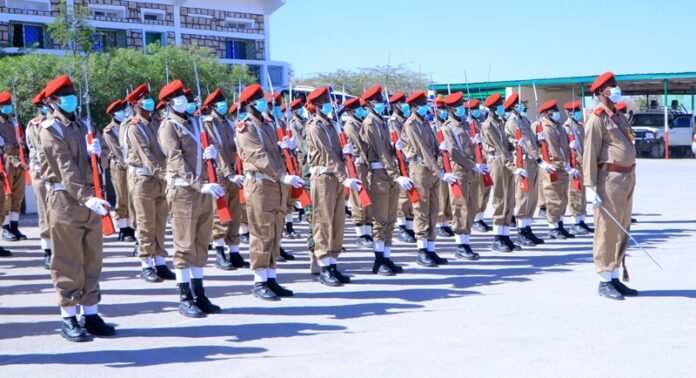 Somaliland National Army has commemorated the 27th anniversary since its inception.

Other government officials the likes of defense minister, and country’s national army chief were also in attendance to witness the ceremony.

SL national army chief, Brigadier Nuh Ismail Tani has spoken of the stages the army went through since its inception, their achievements and their gallant efforts to the most robust force in the region and force to be reckoned with.

He also lauded the performance of the national army.

Army Chief Nuh Tani said: ” We thank his Excellency President Musa Bihi Abdi, the defense minister, chairmen of political parties, representative of the parliament and other members of the public who attended this ceremony with us.”

On the occasion of the celebration marking the 27th anniversary of SL National Army, President Musa Bihi Abdi has extended felicitations to the men and women in uniform, their children and families.

He also reiterated that SL National Army is a force which has all the capability for the defense of its nation.

Bihi said: ” We appreciate how you devoted your nation whether you are you are military personnel, intelligence, security agency, the maritime, fire fighter and you should have the nation stand by you.”

For almost three decades, SL has been trying to get an international recognition from after it declared unilateral decision and withdrew from its union from Somalia in 1991.

Somaliland has reached sufficiency in military and in terms of economy.