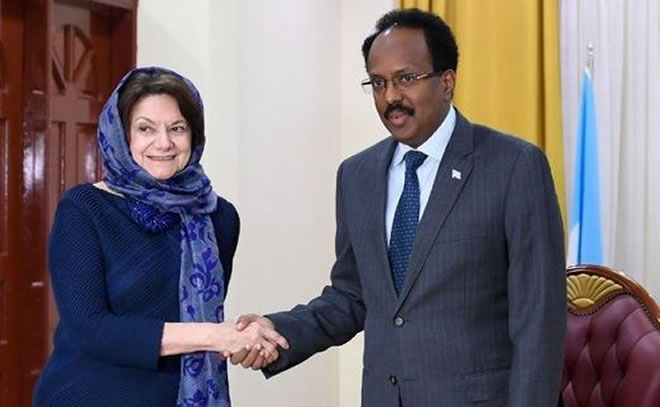 Somalia and the United Nations on Wednesday committed to strengthening their relationship aimed at transforming the Horn of Africa nation.

“The Federal Government of Somalia and the United Nations look forward to deepening their long partnership to enable Somalia to continue to make progress towards a peaceful and prosperous future,” they said in a joint statement issued in Mogadishu.

It said DiCarlo, who arrived in Mogadishu earlier on Wednesday held open, cordial, and frank discussions while committing to strengthening the relationship between the Somali government and the UN.

During the meeting which was also attended by Prime Minister Hassan Ali Khaire, the three leaders discussed practical measures for the government and the UN to work more closely together for the benefit of Somalis.

Khaire stressed the government’s high regard for the work of the UN, of which Somalia is a member, and emphasized Somalia’s commitment to its international obligations and membership.

“The Somali leaders expressed their sympathy and solidarity with the United Nations in the wake of the attack on the UN compound on 1 January 2019. They reiterated their commitment to enhance the security and safety of UN personnel,” it said.

The mortar attack on the UN compound in Mogadishu left three members injured.